If there was ever a genre that benefited artistically from the Silent Era of film it was the horror genre. Everything about this long lost style of fimmaking seemed perfectly fit to instill audiences with dread and terror, relying on stark images and eerie silence to tell bizarre stories. From the German Expressionists to Lon Chaney’s bizarre sagas 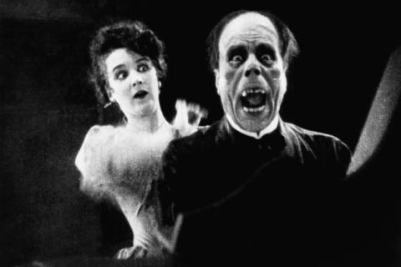 1.Phantom of the Opera: As directors and producers in Hollywood began making their early films, they stuck to traditional feel good stories, until an actor by the name of Lon Chaney came to town with his make-up kit and completely changed the industry. In what is largely considered his finest picture, Chaney portrayed the titular antihero from Gaston Leroux’s Phantom of the Opera. Wisely the actor utilized his clout with the studio to keep his latest make-up creation hidden from any and all promotional material, so in the now classic scene where he is unmasked audiences of the era were terrified, and the scene still packs a jolt even with modern audiences. Despite being absolutely horrific appearance and committing a few morally questionable acts, the Phantom illicits incredible sympathy from the viewer who understands his plight. If your only knowledge of this story comes from the theatrics Andrew Lloyd Webber’s production, then this creepy and dark take on the Phantom of the Opera is well worth a watch.

2. Nosferatu: Even to those who have never seen a silent film, the colorless image of Count Orlock is still chilling and instantly recognizable. FW Murnau’s horror masterpiece was almost lost to time as Bram Stoker’s estate sought to erase every copy of this unlicensed Dracula but like any good movie monster it keeps coming back. Skewing closer to traditional vampire lore than  other films which followed, the bloodsucker in this picture is a rodent like creature with none of charm or sex appeal of Bela Lugosi or Christopher Lee. Despite the number of flicks about the undead that have been made throughout the history of film, Nosferatu still stands as one of the best. 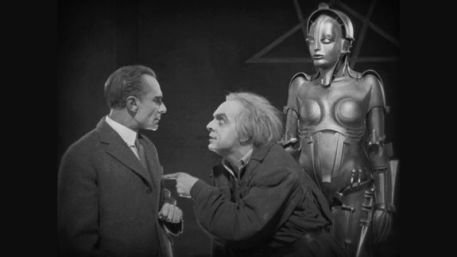 3. Metropolis: Any film historian will tell you, before the rise of the Third Reich, the filmmakers in Europe were years ahead of their American counterparts on a technical level; for proof of this look no further than Metropolis from legendary director Fritz Lang. Lang used dazzling science fiction visuals unlike anything seen before, to tell a tale that is very ground and still holds sway today. The gulf between the haves and have-nots is beautifully explored in Metropolis in an astounding way. The protagonist is a young man of wealth who discovers the wisdom of the working class folk hero Maria, who is replaced by a robot by nefarious forces. What sets this film apart from the others of this style, is the use of art deco stylings over more expressionistic looks lending a sleek and cool futuristic look which continues to inspire science fiction films. 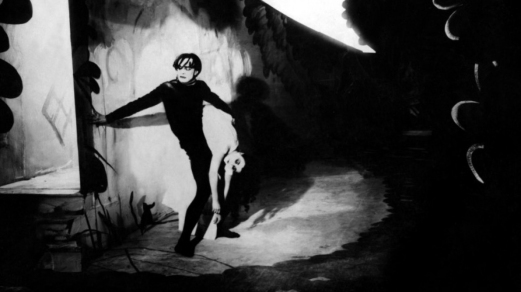 4. The Cabinet of Dr. Caligari: Providing an absolute showcase for the German Expressionist style which continues to influence horror films, the classic The Cabinet of Dr. Caligari is largely credited as being the first full length horror flick. Travelling across the strange landscape of this movie, which resembles a geometrical nightmare, is a hypnotist known as Dr. Caligari, with his somnambulist played by the legendary character actor Conrad Veidt. At night he awakens his somnambulist to murder on his behalf. The picture is a thinly veiled criticism of the exploitation of soldiers by the war hawks who sat atop society. 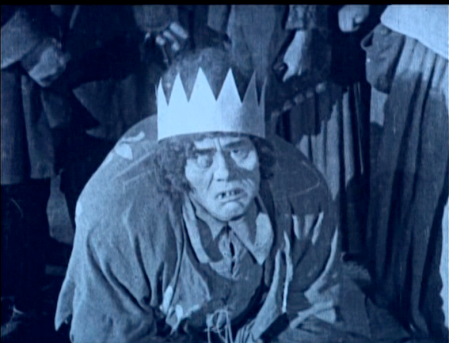 5. The Hunchback of Notre Dame: An absolute epic on every level with hundreds of extras, and grand set pieces while at the center of it all is an emotional tale of a disfigured outsider. Another one of Lon Chaney’s masterpieces of the Silent Era which still holds up to modern audiences. Being a disfigured and sympathetic outcast from society, made Quasimodo the perfect character for Lon Chaney to portray as it fit his MO perfectly. Those familiar with Victor Hugo’s novel are aware of the plot, and have probably seen the various adaptations of the tale, but none of those holds the power of this silent version of the Hunchback of Notre Dame. 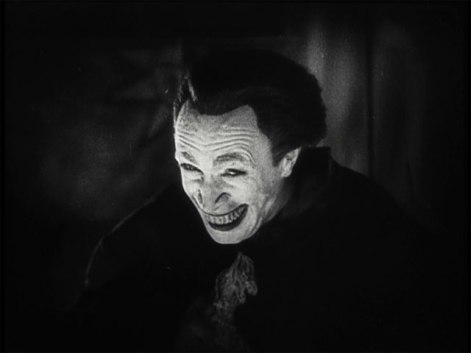 6. The Man Who Laughs: In American Silent Horror, Chaney was not the only star to scare audiences, as the 1928 picture The Man Who Laughs, proved the Conrad Veidt could also give nightmares. Veidt plays Gwynplaine, who as a boy had a grin permanently carved into his face by an evil monarch. As a man he becomes a travelling attraction, as people pay to see his disfigurement. Naturally he falls in love with a woman, who he believes he will never get. In a bold move which would never pass in a studio movie nowadays, the film keeps the tragic ending of the  novel it was based upon.

7. The Golem: How He Came Into the World: Before Frankenstein’s creation became Hollywood’s favorite hulking man-made monster, a creature of Jewish lore became one of filmdom’s scariest monsters. The Golem is actually the third film in director Paul Wegener’s psuedo-trilogy about the Golem, but this is the only one that has survived the test of time. Rabbi Loew must find a way to defend his people from persecution by a corrupt emperor and his knight. He turns to an ancient Jewish trick of building an indestructible man out of clay known as a Golem. The Golem obeys his master dutifully in the beginning but as normally happens in these instances Loew loses control of his creation and finds himself at the mercy of the Golem.

8. The Cat and the Canary: Before Abbott and Costello met Frankenstein and before Shaun had to deal with the dead, the Cat and the Canary found a great balance of horror and humor to satisfy fans of both genres. Anabelle West stands to inherit the fortune of her Uncle Cyrus who passed away 20 years before, but in order to do so she and her family must spend the night in a haunted house. Not only does she have to contend with a possible supernatural entity stalking her, but also a psycho known as the Cat, who is also prowling around in the shadows. Much like the films of Lon Chaney, this picture set the template for the famous Universal Monsters franchise which would propel Universal Studios to greatness. The Cat and the Canary has been remade many times, but few have maintained the magic the original silent version held.

9. Faust: While F.W. Murnau may be most famous for his vampire classic, Nosferatu, but the film he made many years later Faust which may be the most ambitious film of the German filmmaker’s career. In a battle for dominion over the earth Mephisto attacks the village of famed alchemist Faust. In an attempt to save his people from the demonic plague upon them, the old man strikes up a bargain with Mephisto. As withj any story where a deal with the devil is made, things spiral out of control and Faust gets more than he bargained for. Murnau, once again proves that the German Expressionists were decades ahead of Hollywood in filmmaking, as Faust is nothing short of a lavish gothic feast for the eyes.

10. The Unknown: In one of Lon Chaney’s strangest films, the actor played a circus knife thrower who had lost his arms, or did he? Directed by Chaney’s frequent collaborator, the now famous, Tod Browning and co-starring a young Joan Crawford, this is an often overlooked gem in the world of silent movies. A bizarre and macabre film where Alonzo the Armless must contend with his circus’ strong man for the affection of a gypsy girl. In a terrifying twist, Alonzo actually has both his functional arms and is not afraid to use them to violently dispose of those in his way. As per usual Chaney put himself through a painful transformation in order to give audience an unforgettable performance which ranks among his best.