Book Review: ‘Down the Rabbit Hole’ by Holly Madison

Here’s an intriguing premise – a peek behind the doors of the fabled Playboy Mansion and into the lives of those who reside there. The most famous pornographic publication in history, a name synonymous with titillation and raunch, the physical residence of founder Hugh Hefner is the physical manifestation of the sexual fantasy he sells. Celebrities and L.A. power players mingle, luxury at every turn and beautiful naked women as far as the eye could see.

If keeping that fantasy intact is for some reason important to you, do not read this book. Rather than a tawdry tabloid tell-all, it’s one woman taking ownership of decisions and mistakes she made in her life and revealing what life was like in the Mansion and on the arm of Hefner himself as his ‘main’ girlfriend.

Holly Madison introduces herself as another small-town girl with ambitions towards fame in the entertainment industry, who takes the chance to join the Playboy party entourage in an attempt to attain this goal. Like many in her position she saw becoming a Playboy model an acknowledgement of her beauty and class. After making her connections at a party she moves into the Mansion as one of ‘Hefs’ many girlfriends and eventually his room as the central member of his harem.

One thing that gets addressed early in the book, possibly to get the unsavory details out of the way, is the ‘bedroom ritual’ that makes up the sexual relationship between Hef and his girlfriends. This largely ritualistic and specific routine, with set clothing items and foot washing (not to mention the similarity between all the women), feels almost clinical in execution. The impression given is that Hef goes through with it through a sense of obligation, like he’s an avatar for this sexual fantasy and it’s up to him alone to keep it alive. There’s no love or passion, and the repetition of the routine suggests that he’s not that attached to the process in his later years.

The relationship between Hef and his harem is, of course, more than sexual. Madison readily admits that she either was convinced or convinced herself that she was in love with him, and he comes across as a man whose normal interaction involves manipulation. He’s very much a showman who has spent a lifetime at the top of his field, and by Madison’s account he puts this to use by playing the girlfriends off each other. Madison reports feelings like she was vying for his attention and approval, and lies and rumours ran rampant. The sense of loneliness that came with living in a house of competitiveness and manipulation eventually drove Madison to consider suicide. This is far removed from the outside image sold by Playboy and the reputation of the Mansion, the exclusive status of which has been left in the past. 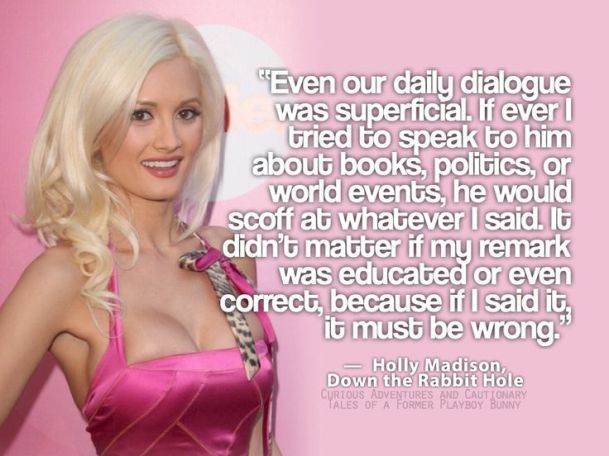 As this is Holly Madison’s story we do eventually leave the Mansion and follow her life through her post-Playboy career and relationships including reality television and live performances. Having been completely unfamiliar with Madison prior to picking up the book the last third of the story didn’t hold my interest. Many of the figures referenced were new names and I wound up watching a few episodes of the reality series ‘Girls Next Door’ for context. The debunking of the Playboy image is certainly an engaging read and is an interesting inside look at how public image is managed. The bookends to that portion will only be of interest to the established audience, but the central concept is worth a look.

7 thoughts on “Book Review: ‘Down the Rabbit Hole’ by Holly Madison”