Synopsis:  Dany deals with the aftermath of her victory while Tyrion ponders how to control the Mother of Dragons.  Jamie reports to Cersei of their defeat and delivers a hard truth.  Jorah reunites with Dany on Dragonstone as Jon continues to mine dragonglass.  In Winterfell Bran makes a harrowing discovery.  Sam makes a tough decision while Gilly makes an important discovery.  Jon proposes a desperate plan in council.  Bronn brokers a meeting between Jamie and Tyrion, while Ser Davos visits an old friend.  Cersei delivers surprising news to Jamie.  Littlefinger plots to come between Arya and Sansa.  Jon and Davos arrive at Eastwatch and gain some familiar travel companions.

Review:  As we move closer to the season finale (only two episodes left!) of Game of Thrones, various pieces are starting to fall into place.  While “Eastwatch” contains a lot of set-up, presumably for these next two episodes and season eight, none of it is without importance.  I predicted the opening scene would be Jamie being saved by Bronn and I wasn’t wrong.  Of course like everything Bronn does it was out of self interest.  Bronn  knows that without Jamie he won’t collect so much as a Bowl of Brown from Fleabottom.

Meanwhile, Dany enjoys her first decisive victory in Westeros and implores the defeated armies to bend the knee.  Most do except for Randyll Tarly and his son Dickon, who are promptly fried by Drogon.  I can’t decide whether their act was noble or stupid.  Probably a bit of both.  After that EVERYONE bends the knee.  What’s confounding is that Dany says she’s not there to conquer and destroy their homes but to help them.  Yet also she says essentially “bend the knee or die.”  After Drogon turns Randyll and Dickon into Tarly Hotpockets, everyone who bent the knee did so out of fear.  They don’t love this queen because at this point they’ve seen nothing to suggest Dany cares about them.  As far as they are concerned she’s a foreign invader with a surname they associate with a king who burnt people alive for sheer amusement.

If Jamie had any confidence going into battle before, I think that’s gone now.  He sees what one dragon can do and when he reports to Cersei of their defeat you can see the fear/panic in his eyes.  Not surprising that Jamie suggests peace but of course Cersei is having none of it.  She’ll burn Kings’ Landing to the ground before she lets anyone else sit the Iron Throne.  I have to admit it was somewhat gratifying to see the look on Cersei’s face when Jamie told her the truth about Joffrey’s death.  To know that Olenna got the best of her even in death has to grate at her.

Back on Dragonstone, Dany returns in triumphant fashion, landing Drogon in front of Jon Snow.  Not sure if this was to intimidate Jon, show her strength, or just show off.  Either way, it didn’t work as Jon reaches out to Drogon…who allows him to stroke him.  You can see the shock on Dany’s face.  Dragons know the blood of old Valyria, they know the blood of Targaryens.  It will be interesting to see how this information is revealed to him.  Before Dany and Jon can chat for long, Ser Jorah returns to Dany’s side who welcomes him back unequivocally.  Will Ser Jorah eventually die in her service?  I think that might be inevitable. 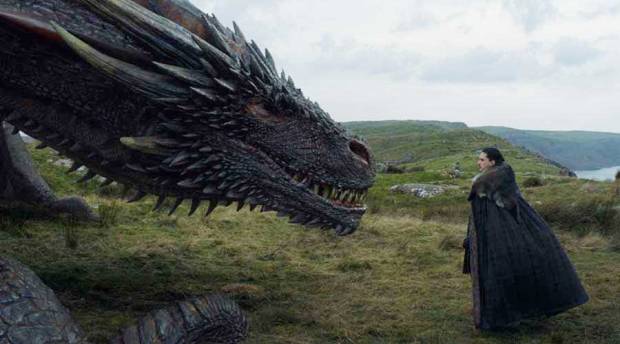 In the North Bran continues his Three-Eyed Raven antics, sending crows beyond the Wall who see a vast army of the dead.  Without hesitation he advises the maester to send ravens throughout the seven kingdoms.  One of those places just happens to be the Citadel where Sam implores the maesters to advise Westeros that the threat is real and to start searching the scrolls for any information that will help.  Too bad the maesters don’t take him seriously.

Conflicted about Dany’s recent choices, Tyrion sits down with Varys to discuss their Queen.  Varys implores Tyrion to try to make her listen as he doesn’t want a repetition of the Mad King.  What really hit home for me was when Varys said whenever the Mad King burned people alive, Varys would tell himself “I’m not the one doing it.”  In light of what happened in Charlottesville, Virgina this past weekend, that statement rings even more true.  Somehow Tyrion must find a way to temper Dany’s passions.  Aside from Jon, Tyrion is the only one who favors reason over emotion.  That’s why a political marriage  between Jon and Dany makes sense.  He gets help to defeat the White Walkers, and Dany demonstrates to the kingdoms that she cares about them.

Jon meanwhile received a raven from Winterfell informing him that Sansa and Bran have returned.  This immediately motivates Jon to return home and help his people, now that more of his family is involved.  I love how he stood up to Dany when she tried to stop him from leaving and basically said I don’t need your permission.  Though I think her motivation for wanting Jon to stay is also very personal.  The conversation however, turns to convincing Cersei that the Army of the Dead is real.  Jon and Dany know that they will need every man they can get.  This involves traveling beyond The Wall to capture a wight.  But in order to do that they need to broker a meeting first.

Enter in Bronn once again who sets up a meeting between Tyrion and Jamie.  The tension in the dragon hall is palpable as Jamie is still outraged about Tyrion killing Tywin.  Tyrion tries to explain himself but Jamie is having none of it.  Yet ultimately the two decide to get Cersei involved if possible.  Meanwhile, Davos heads to Flea Bottom to pick up…Gendry of all people!  He stopped rowing.  Davos asks him to come back with him fight and before the words are barely out of his mouth Gendry agrees.  He even manages to crush a few skulls with a giant war hammer reminiscent of his father’s on the way out of King’s Landing.  Plus he gave a giant FU to Davos by just telling Jon who he was outright when Davos cautioned against it.  Seems like Jon and Gendry could become great friends, just like Ned and Robert were.  Gendry even offers to join Jon’s ranging beyond the wall to capture a wight. 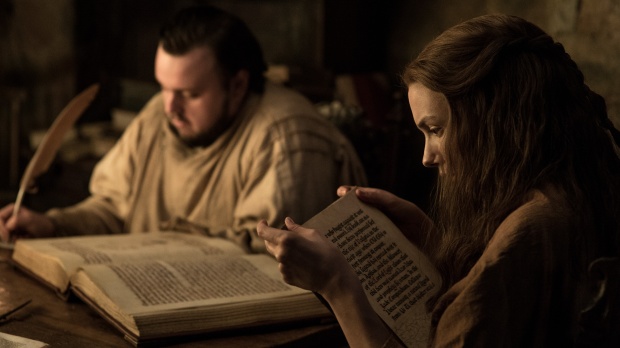 Shockingly when Jamie confronts Cersei about this meeting with Tyrion and the Army of the Dead she’s ok with it.  But the real game changer comes with Cersei’s reveal that she is pregnant with Jamie’s child.  Now this could be true but I wouldn’t put it past Cersei to lie to Jamie.  It would help ensure his loyalty.  Plus she warms him not to ever betray him again.  How that situation plays out is one I’m really anticipating.  Although I don’t think we’ll find out this year.

Back at the Citadel Sam makes the decision to leave because as he says “I’m tired of reading about the achievement of better men.”  he believes action is necessary and along with Gilly takes many scrolls back with him.  The one I hope he takes back is the one Gilly read to him.  Blink and you missed it but it’s an account that Rhaegar (Jon’s father) annulled his marriage with Elia Martell to marry Lyanna Stark.  This is huge because it means Jon is NOT a bastard and that he has a better claim to the Iron Throne than Dany.  The implications to the rest of the series can not be overstated here.

Finally Littlefinger does something interesting this season!  Arya sees him talking with the other Lords of the North, presumably about removing Jon.  Arya pursues him to his bedroom and nabs a scroll from under Littlefinger’s bed.  Yet Littlefinger is watching her the whole time.  He’s obviously trying to drive a wedge between Sansa and Arya.  The question is what’s his endgame?

Well after about 45 minutes we actually get to Eastwatch where Thoros, The Hound, and Beric Dondarrion have all been imprisoned.  Despite this fact, Jon recognizes how valuable they could be and decides they can come with them.  It’s like a regular A-Team.  Hey wait a sec….

While this episode was solid, I think it was the weakest since the season premiere.  There’s just too much set up.  That doesn’t take away from the fact that it’s a great episode though.  Next week’s “Death is the Enemy” looks to be jam-packed with White Walker mayhem.  Good fortune to Jon and company in the wars to come.