Throughout his decades long career, Vincent Price cemented his status has arguably the biggest icon in the history of horror films. With his thin mustache, dark charisma, and trademark voice, he terrified audiences for generations while becoming synonymous with horror. Naturally given his association with the genre his talents were not given the 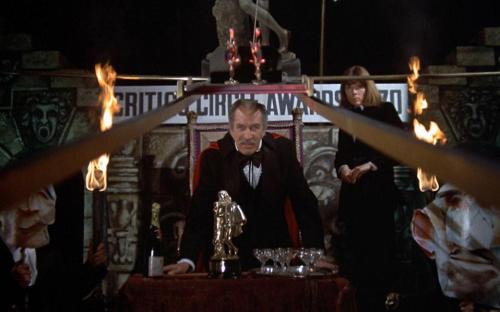 proper respect they deserved from mainstream film critics. Nor was he really allowed to show the depth of his acting talent. This leaves one to wonder if that is what he tapped into to play the lead role in Theatre of Blood. From director Douglas Hickox, this film classic mixes grand guignol style horrors with a healthy dose of campy comedy to produce one of Britain’s best horror flicks.

Price plays famed Shakespearean actor Edward Lionheart, a stage performer who is rejected for a prestigious award he feels he deserves. Naturally he confronts the judging committee for this award, and overtaken by grief leaps to his death into the Thames during this fateful confrontation. For years he is believed to be dead until the critics who denied Lionheart his glory begin to die in violently over-the-top fashion. The murderer seems to be taking inspiration from the works of William Shakespeare; one gluttonous critic is force-fed the remains his poodles until he suffocates (ala Titus Andronicus), another is drowned in a vat of wine (ala Richard III), another is impaled by a spear then dragged by a horse (ala Troillus and Cressida), as well as others in ways which are gruesome yet darkly fun. Naturally the inspector on the case discovers the supposedly dead Edward Lionheart is the one with the means and motive to commit these murders. As you may have guessed, Lionheart survived his suicide attempt and was rescued by a colony of; hippies, drug addicts, tramps, and other 60’s era counter-culture types who made him their leader.

This role is often heralded as Vincent Price’s finest performance as it allows him to play to his black comedic best. In fact the actor himself and his co-star Diana Rigg consider this the most fun film they had worked on in their prestigious careers. Playing Edward Lionheart allowed him to demonstrate his experience with Shakespearean drama while combining it with the low budget campy horror he was most famous for. Proving to be more than up for the task of sharing the screen with Price was Diana Rigg as Lionheart’s daughter Edwina, who is caught up in her father’s madness and pays the price for it. For modern audiences who may be familiar with Rigg for her work on Game of Thrones it

never hurts to be reminded that she’s been a badass her entire career. In fact Price is surrounded by a supporting cast of noted character actors who approach their roles with seriousness to balance Price’s madness.

Throughout the film, Hickox walks a fine line between the scares and laughter just as a director at the top of his craft should. With the beautiful work of cinematographer Wolfgang Suschitzky, Hickox brilliantly turns the city of London into a playground for a disgruntled murderous actor. Props must also be given to screenwriter Anthony Greville-Bell who manages to blend elements of Shakespeare with horror with a healthy dose of macabre humor. Strangely with all of these different components the film still works.