Recently I was recommended the book The Night Parade by Ronald Malfi, as someone always looking for a good scary read I went to check it out. Unfortunately the copy belonging to my local library had been checked out, so instead I got a copy of Malfi’s 2011 book Floating Staircase which I will review for you today. True this is a horror novel with a ghost, but make no mistake it is the protagonist’s own past which is haunting him throughout the plot.

Novelist Travis Glasgow and his wife Jodie, move to the snow covered town of Westlake to be closer to his older brother. Travis believes with these familial ties he can finally get past the death of his younger brother which occurred years before. But Travis discovers 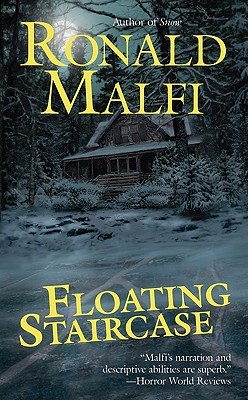 his cold dark house holds a collection of secrets, tied to the death of the boy who had lived there previously. Driven by the notion that he can in some way find peace for what happened in his youth, the writer becomes obsessive about figuring out what happened to this boy. As he throws himself more and more into the case, he begins to ruffle feathers around town. His relationships fracture and the specter of a small boy haunts him, yet with each chapter he becomes closer to the truth.

Ronald Malfi has done a brilliant job creating the atmosphere for this book, as your reading it you will not be able to find yourself near shivering as you build the mental image of the stark wintry setting of Floating Staircase. This already puts you on edge as you follow the protagonist on his quest. Despite the numerous twists the plot takes and the introduction of characters throughout, the author keeps things tight and you never lose track of what is happening. Despite Travis’ deteriorating mental state, he somehow never becomes unreliable in the role of narrator. I can honestly say that the collection of awards and nominations this book received when it was released were very well deserved. Ronald Malfi has put an expert touch on this haunted house-type story that will have readers completely engrossed, not wanting to put it down. As good as Floating Staircase is the bar has been set very high for the Night Parade when I have the opportunity to read that.