Legendary director Alfred Hitchcock coined the term MacGuffin as a name for an object the actions which take place in a movie revolve around. No matter the size or origin, these objects propel the characters onscreen forward and serve as the center for all the action. Unsurprisingly some of the greatest films of all time have some of the most unique MacGuffins of all time.

Stolen $40,000 (Psycho): Considering the Master of Suspense coined the term, it is fitting to find an entry from one of his greatest films. The seeming protagonist of the horror classic Psycho, Marion Crane, finds herself with access to $40,000 in cash that her boss is holding for a client. She steals the money and takes off down desert highways in a tension-filled attempt to put distance between herself and whoever may be looking for her. Needing lodging for the night, Marion checks into the Bates Motel as she morally struggles with what her next step should be. As anyone familiar with the movie knows, she checks in but never checks out. The fact that she has stolen quite a large sum of money launches and investigation, which brings even more victims to meet the eccentric Norman Bates at his motel.

Letters of Transit (Casablanca): In Casablanca, refugees who lost everything to the Nazi war machine are struggling to find a way to escape and find safe haven in the United States. One such man is renowned freedom fighter Victor Lazlo who needs to escape to continue his work to bring down the Third Reich. His only hope lies in Rick, the world weary owner of the local watering hole, who holds the letters of transit needed for Victor and his wife Ilsa to leave Casablanca. The wrench in the plan comes from the fact that Ilsa happens to be the love of Rick’s life who he lost many years before. As the Nazis stationed in the city ramp up the tension we see a love triangle play out, with these letters at the center of it all. Throughout Casablanca the question lingers as to what Rick does with these much sought after letters; does he follow his heart or does he do what’s right?

Maltese Falcon (the Maltese Falcon): Private Eye Sam Spade set out to find who murdered his partner and along the way gets caught up in a conspiracy to find a lost treasure. According to legend the Maltese Falcon is a golden statue covered in jewels, but hidden in a coating of black enamel. Reluctantly Spade is draw by a crime boss, a dubious criminal, and a femme fatale to help search for this Maltese Falcon. What makes the Maltese Falcon so exciting is not the actual statue itself, but rather the hunt for it and wondering how a simple detective will react as things continue to get out of hand.

Death Star plans (Star Wars): Two hapless droids are sent to a backwater desert planet with perhaps the most important MacGuffin in the galaxy, the plans for the Death Star. A space station built by the Empire, the Death Star has the ability to destroy and entire world. The architect who built the weapon, however included a weakness which could destroy it.  The schematics of the Death Star are passed from Princess Leia to a small droid in the hope that everything will work out. What follows is one of the most beloved films of all time, as Leia, Luke Skywalker, Han Solo, Chewbacca, and the droids must get these secret plans to the Rebel Alliance giving them a ray of hope against total annihilation.

Suitcase (Pulp Fiction): The perfect example of the film having a MacGuffin, but it not being necessary to know exactly what it is. The mystery begins, when hitmen Jules Winnfield and Vincent Vega, retrieve a mysterious suitcase for their boss which obviously contains something important. During the standoff in a diner which brings many of the movie’s events full circle, the suitcase of interest is opened by Jules to reveal glowing contents which are unknown to the viewer. What exactly is inside is not shown onscreen. In fact when Samuel L. Jackson asked Quentin Tarantino what was inside the suitcase the answer was “whatever you want it to be”.

The One Ring (Lord of the Rings trilogy): Forged by a legendary evil, the One Ring is a powerful weapon which has fallen into the hands of an unassuming Hobbit named Frodo Baggins. While his Uncle Bilbo, used this ring to have fun and make himself invisible, the wizard Gandalf has learned the truth. Unless Frodo can destroy the One Ring in the fires of Mount Doom, the dark lord Sauron will regain it and return to power. As Frodo and his friends embark on a quest through Middle Earth, they are besieged on all sides by the forces of evil who are also seeking the ring. In this simple gold band with Elvish inscription rests the entire fate of Middle Earth. 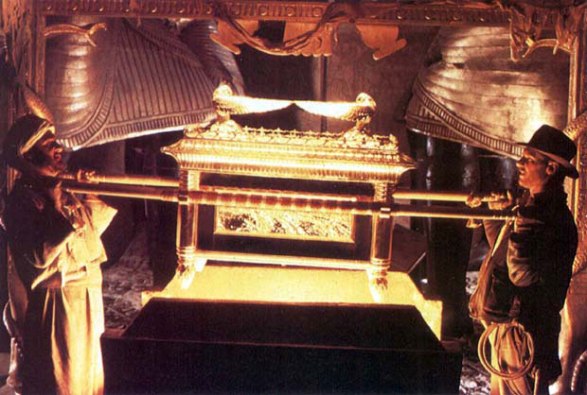 Ark of the Covenant (Raiders of the Lost Ark): In the Old Testament, the Hebrews seeking their Promised Land, had one object which they valued above all else, the Ark of the Covenant. Said to contain; the Ten Commandments, Moses’ staff, mana,  you know assorted religious items….oh and the spirit of the Lord himself dwells there as well. The Ark has been lost to time. As World War II begins, the Third Reich is in pursuit of the Ark knowing that obtaining this legendary artifact will make them unstoppable. Unfortunately for them, the greatest archaeologist hero in moviedom is bound to reach the Ark of the Covenant before them.  When Nazis foolishly think victory is at hand and open the Ark, it makes for one of the most memorable moments in film history.

Rosebud (Citizen Kane): As the wealthy media mogul Charles Foster Kane passed away, he puzzled the world with his final word “Rosebud”. The mystery behind the meaning of Rosebud, drives a reporter to explore Kane’s past and talk to those who knew him best, hoping for an answer. A picture is put together of a boy taken from his peaceful and innocent life and adopted by a powerful businessman. Kane grew into adulthood and built his own newspaper business devoted to a “Declaration of Intent” to use his resources and influence to fight for the common person. Charles Foster Kane watched his empire grow but as he gained more power, it changed him. In the end Charles Foster Kane amassed a fortune as well as prestige but he lost his soul in the process becoming a part of the system he once fought against. At the end of it all when we as the viewers learn the mystery behind Rosebud it is nothing short of heartbreaking.