For eight decades Superman has been one of the most iconic figures in popular culture. It can be best summed up from an esteemed Egyptian scholar who once said there are three Americans everybody in the world recognizes: John F. Kennedy, Muhammed Ali, and Superman. One of the things which makes the Man of Steel such a popular figure is the multitude of superpowers he wisely wields. Of course being around for so long, with so many different creators across a multitude of mediums leaving their mark on the character, he is bound to get a power here or there which is just plain odd.

Hypnosis: In Action Comics #38, Superman discovers many citizens of Metropolis are acting strangely and committing crimes which are out of character. He seeks to find the source of this weirdness and discovers a psychologist named Harold Morton has been controlling their minds through secret radio waves. When Morton tries to use his mind control on the Man of Steel only to be hit with a rude awakening. Out of nowhere, Superman whips out his hypnosis ability and uses it to get the evil psychologist to turn himself in to the police. If he used this power more frequently, it would be safe to say there would be a lot less villains for him to fight as he could just hypnotize them into giving up. The Man of Steel also famously utilized this power at the end of Superman II when he once again had to hide his true identity from Lois Lane and was able to magically erase her memory of who he is. 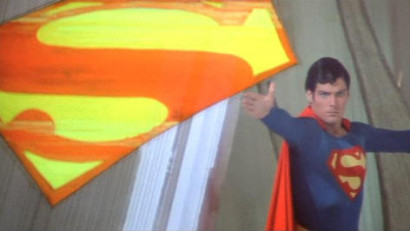 Throwing S-shield: The “S” emblem on Superman’s chest is instantly recognizable by people all over the world as a symbol of hope. According to Superman II, this symbol of hope can also be used as a weapon. While battling General Zod, Ursa, and Non with the home court advantage of being in his Fortress of Solitude, Superman got to show off a couple of powers that he had never demonstrated before or since. The one that people still remember was his tossing of the famed “S” logo at his enemies which transformed into cellophane in order to wrap them up.

Rebuilding walls: Speaking of Superman in the movies in the worst Superman movie to date, Superman IV: the Quest for Peace, Supes finds himself engaged with the supposed threat of Nuclear Man. The clash between these two powerful titans destroys one the humankind’s greatest architectural achievements, the Great Wall of China. This proves to be no problem though as Superman uses his never before seen wall-building abilities. Rather than just using his superspeed to help repair the iconic landmark, Superman shoots a blue beam out of his eyes and miraculously the bricks go back into place and the Great Wall is easily restored to its original glory. 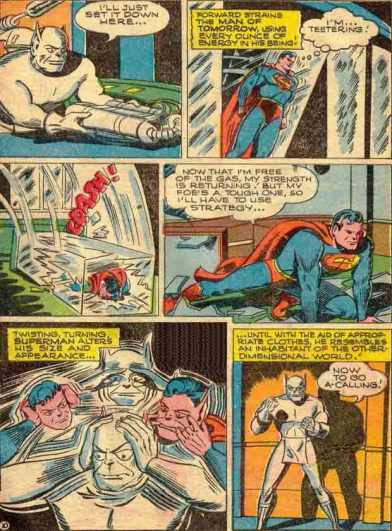 Mind Control & Shapeshifting: Despite having skin that is famously impervious to damage, it seems to be quite flexible and moldable in Superman #45. When trapped by an alien menace, Superman must not only break out of their trap, but also find a way to trick his enemy. First he focuses hard enough to make his captor outside of the trap bend to his will. Once he is free we have a panel of the Man of Steel twisting and contorting his face until he resembles a pointy eared pale alien. Do not try to figure out how this is even remotely possible, you will only hurt yourself. 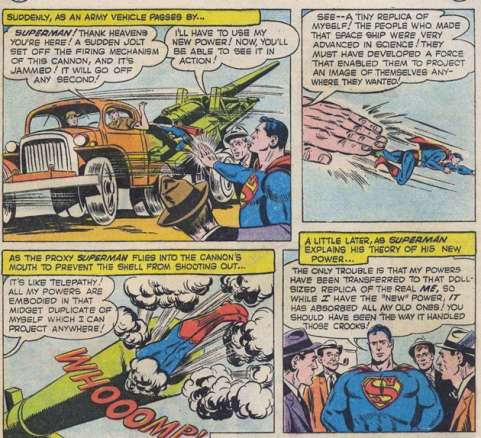 Making a Tiny Superman: When you have all the responsibilities Superman has, it can definitely weigh down on your shoulders. Luckily for one issue, the hero gained the ability to create a little Man of Tomorrow whom he could launch out of the palm of his hand. Seeing as how small versions of big things are cute, the public falls in love with this pint-sized Man of Steel, much to the chagrin of the normal sized Man of Steel. In Superman #125, Supes discovers a spaceship which takes away many of his powers, but leaves him with the ability to shoot a tiny replica of himself out of his palm. At first he is happy to have a little help (hahahaha get it?!) but eventually he sours on this miniature sidekick. Seething with jealousy he is unable to cope with people fawning over this cute new Superman, he sends the miniature hero on a suicide mission to stop a Kryptonite meteor shower. By the end of the issue the little guy selflessly gives his own tiny life to save the big guy, leaving a melancholy Last Son of Krypton to feel pretty bad about the way he treated his brief sidekick.