If there’s one complaint against the Marvel Cinematic Universe that has remained consistent and valid is the lack of female representation among their main cast. Up until now the world’s most successful cinematic franchise has only given us female lead characters in their TV shows. Ant-Man and the Wasp will put a female superhero on the marquee whilst we still won’t can an entirely female lead movie until next year.

What makes the whole situation frustrating for those making this criticism is how often the MCU had an easy opportunity to make this change and passed it by. And we’re going to list some of those moments right now.

THE REASON WHY THIS HAPPENS DOESN’T HOLD UP

Whenever pressed the response from producers cites business reasons. The audience doesn’t want female superheroes, they said. Box office numbers actually back this up, they tend to fail. Of course, if you look at what is on offer, you’ll not that all these movies are terrible. No, people didn’t see Supergirl, Elektra, Tank Girl or Catwoman because they had female leads…it’s because they’re really bad movies. No-one looks at Superman: The Quest For Peace, Batman and Robin or Steel and conclude that people don’t want male led superhero movies.

What happens when you make a GOOD female led superhero movie like Wonder Woman? You break the damn bank.

WOMEN ARE THE LOVE INTERESTS

It’s an unusual quirk of Western media that all characters need some kind of love interest even if it contributes nothing to the story. In every single film to date the lead character has been provided with an attractive woman who yearns after him. In the case of Doctor Strange we have Dr. Palmer (Rachel McAdams), another doctor who helps him after he is wounded in battle. Although Palmer is a doctor in her own right and a romantic relationship doesn’t contribute to the story at all she’s cast as a love interest and former partner. The first female character to be featured in a title – The Wasp – was established as a love interest first and superhero second.

When of the first pictures that turned up when searching for Dr. Palmer images.

The third film in the 20+ film series introduced the first female superhero in the MCU: Black Widow. She was immediately a fan favourite, providing an accurate depiction of a classic comic character. As far as the film series is concerned, she was a core member of the original Avengers line up and appeared in 6 movies to date. There has been interest in Black Widow’s backstory, only hinted at in Age of Ultron, for years with fan intros and artwork turning up everywhere. Some have even suggested a grittier mini-series.

Since we started writing this feature a director for an official Black Widow movie was announced. Fucking finally. 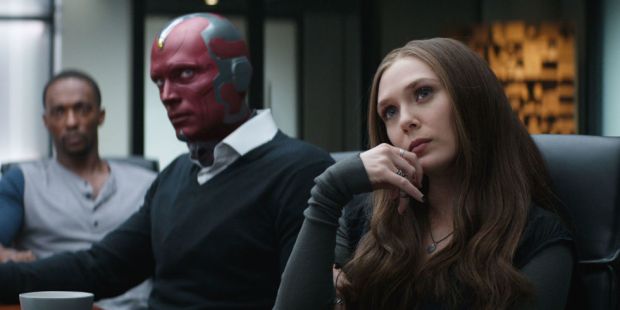 Scarlet Witch feels like the most shortchanged of the key Avengers team. She first appeared in Age of Ultron but they didn’t pin down what her powers were until Civil War. Even then they’d dropped all the mind control business and just made her telekinetic. She’s been highly inconsistent and ultimately her story arc hinged on her relationship with Vision. This story was very much dropped into our lap in Infinity War and…we have questions. He’s a robot for one thing. Why didn’t we get more time with these characters to learn about Scarlet Witch’s character outside of being a twin and then love interest. Maybe decide what her powers are.

Infinity War is a great chance to use the word culmination. After a full decade of back-to-back smash hits we saw everything smoosh together in an epic battle with Thanos. Although the female characters weren’t quite benched, giving Black Widow, Okoye and Scarlett Witch their own fight scene in the finale feels like tokenism. Getting the shortest of short straws in Gamora, who finally got a plotline of her own for once and it gets cut short when she is chucked off a cliff. It’s an emotional beat not entirely earned, as Gamora has always been a badass love interest for Star-Lord rather than a character unto herself. Now she’s getting killed to provide Thanos and Star-Lord with motivation. This kind of malarky is a plot device comic readers have long taken issue with.

Also, where the hell was Valkyrie?

DAUGHTERS OF THE DRAGON

We’ve got Misty Knight in Luke Cage, we’ve got Colleen Wing in Iron Fist…why are we sitting on this? They’ve been a kick-ass team for 41 years in the comics, and we’ve seen them working together happily in The Defenders. We have a completely unique superhero team up title fully cast, established and ready to go. Make this a show. Or a movie. Do it.

POTENTIAL CHARACTERS ON THE SIDE-LINES

We’ve already seen that the MCU can take B-List characters and turn them into household names. Ant-Man and the Wasp have gone from the least known founding Avengers to household names outside of comic readerships. So there’s little excuse for some of the excellent female characters to make an appearance on screen. Spider-Woman and Spider-Gwen are consistently popular. Ms Marvel’s battles with the Inventors is a wholly unique superhero tale. Squirrel Girl is a pure delight. She-Hulk has one foot in courtroom drama and another in superhero beat-downs. Tigra could provide some retro kitsch stylings. These are all gathering dust while they look for more white men named Chris to cast.

This part of Age of Ultron still pisses me off. Black Widow, professional badass, gets herself captured by the back guys and sits in a prison cell waiting for Bruce Banner…not the Hulk, just Bruce Banner…fights his way in and rescues her.

It’s such a lazy, pointless plot thread that serves only to advance a tacked on romantic arc because they didn’t have anything else for the girl to do and goes completely against the established character. Well, at least it was well utilised in Infinity War and not completely pushed aside within moments.

One thought on “8 Times The MCU Overlooked Women”