In superhero comics, legacy is something that is massively important. The idea that a hero creates an identity so great that it continues on well after they hang up the boots. Sure we all know the likes of; Green Lantern, the Flash, and Captain Marvel (both the Kree-kind and the “Shazam!”-yelling kind), but there is another heroic legacy that has endeared itself to fans, Ms. Marvel. Starting in 1968 there has been a Ms. Marvel to be a key part of the Marvel Universe, a legacy which continues to this day.

Carol Danvers: Though she is known to mainstream audiences as Captain Marvel, Carol Danvers earned her spot in comicdom as the original Ms. Marvel. As a security officer at a top secret military installation, the former fighter pilot crosses paths with the Kree soldier Mar-Vell, more famously known as the superhero Captain Marvel. During one of Marvel’s battles with the villain Yon-Rogg a device called the Psychic Magnetron exploded imprinting his abilities onto Danvers. Adopting the mantle of Ms. Marvel, Danvers went out to try her own hand at superheroics, and despite taking on the name of Captain Marvel, she eventually decided to forge her own heroic path. Making an odd career jump from decorated Air Force veteran to editor at a women’s magazine owned by the Daily Bugle, Danvers followed in a long line of superheroes who moonlighted as members of the press. A controversial storyline which kicked off in the Avengers #200 saw the beginning of Danvers’ hardships for a number of years. Leaving the Avengers in disgust she bounced around the Marvel Universe aimlessly, even adopting new monikers like Warbird and Binary. In the 2000’s a new regime at Marvel recognized the potential for Ms. Marvel to be their flagship female superhero and positioned her as such. Danvers was at the forefront of events like Civil War and Secret Invasion, and even led the Avengers for a while. When the time came, Carol Danvers relinquished her role as Ms. Marvel to fulfill the mantle as the latest Captain Marvel, which she remains in to this day. 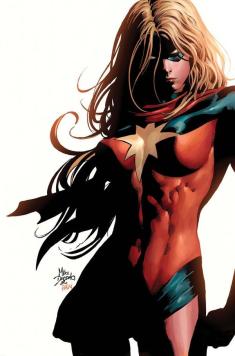 Karla Sofen: During the Marvel era known as the “Dark Reign” Norman Osborne and his collective known as the Cabal successfully dismantled the superhero community as we know it. As the director of SHIELD which he renames HAMMER, Osborne realizes he must placate the masses and to do so opts to create his own Avengers made of villains, unofficially known as the Dark Avengers. Frequent Thunderbolts member, Karla Sofen, AKA Moonstone is drafted to the team, and given the Ms. Marvel mantle, to spite Danvers who was driven underground with the rest of the heroes. With this usually B-level villain brought into the forefront, readers got to see a side of the character rarely seen before. She begins a romance with Noh-Varr who has taken on the Captain Marvel mantle but, he eventually leaves her and the team behind. Despite Osborne’s attempt to get into her head, she remains loyal to his Dark Avengers, even standing as one of the last by his side during the Battle of Asgard in the Siege mini series. After a climactic battle with Carol Danvers she is forced to relinquish the Ms. Marvel mantle back to it’s rightful owner. 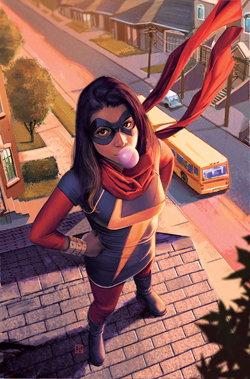 Kamala Khan: The current and arguably most popular hero to take up the Ms. Marvel mantle. The quirky teenage daughter of a Pakistani immigrants in Jersey City, Khan learns she is an Inhuman when the Terrigen Mist sweeping over the planet turns her into a polymorph. Having idolized the newly minted Captain Marvel, Carol Danvers, Khan takes on her old alter ego as Ms. Marvel. Given her young age, Ms. Marvel has proven to be the perfect hero to take on the hyper-realized world which real teens face every day. Saving her hometown from the threats of villains like; the Inventor, Doc X, and Lockdown, may be hard enough, but this plucky hero also has to find a balance for her social life as a teenager as well. In fact this Ms. Marvel’s supporting cast has played a large role in endearing her to readers: her well-meaning parents, religious brother Aamir, caring Imam Sheikh Abdullah, and her best friend with whom she shares complicated feelings Bruno. Like her predecessor, her time with the Avengers proved tumultuous, so Khan led her fellow young heroes in breaking away to form the Champions. Co-creator G. Willow Wilson created the character to be a modern day Peter Parker, a young hero who audiences could relate to, needless to say she succeeded. Jersey City’s finest hero has played a key role in drawing in a new generation of comic readers. Outside of comics, Ms. Marvel has exploded in popularity, showing up in; cartoons, video games, and even Halloween costumes.

For more Ms. Marvel goodness, be sure to check out the American Superhero: Encyclopedia of Caped Crusaders in History from ABC-CLIO publishing. A certain handsome, charming, troubled, talented, Memphis-based writer for the House of Geekery (that would be me to be exact) has contributed an entire chapter on the history of the character. Feel free to buy a copy HERE