Plot: Robin is desperate to get his own superhero movie, but he and the Teen Titans are considered a joke among the superhero community. In his desperation he seeks about an arch-nemesis, an assassin named Slade, to give his story a hook. 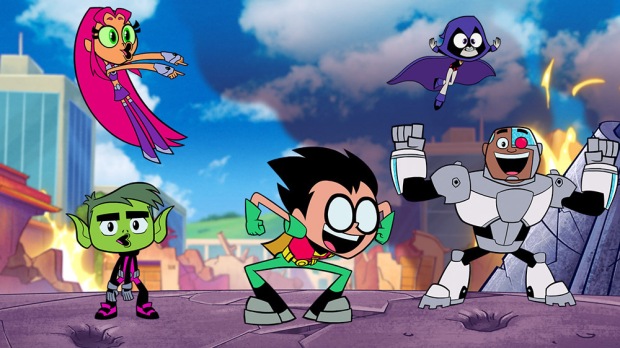 Review: There’s a few things to address being we get into it.

First, this is a big screen adaptation of the cartoon series Teen Titans Go!, which is in itself a reboot of the popular animated show Teen Titans. And the internet loses its collective shit over it on a regular basis because how dare they take the same source material and do something different with it. We should only have the same things done again and again. But, sadly, the existence of Teen Titans Go! has erased Teen Titans from history. You can’t simply ignore the one made for 5 year olds and, instead, watch the version you feel nostalgia for because its gone.

In short, don’t go complaining about it in the comments because I don’t care. 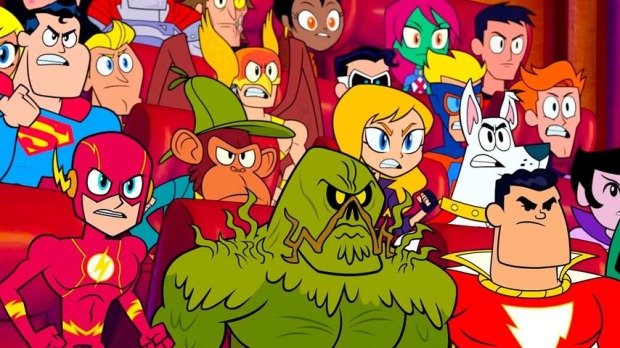 Next, from a film-making perspective, this movie is a headache. It’s bright and the visuals are obnoxious. Ironically the backgrounds are weirdly lacking detail, with crowds of completely static characters. For half the film the animation style changes for musical numbers, but this gimmick gets dropped in the second have. The plot is highly episodic, at one point introducing a time travel plot that gets undone and forgotten about after ten minutes. Plus the characters are unlikeable by design.

But it is funny. At least, there’s two groups who will find it funny.

I saw the movie with my 5 and 8 year old children, and they found it funny. They liked the music and the characters, and found the endless fart jokes funny. There’s a talented voice cast involved in the movie and they have been voicing these characters for a very long time. They’ve got the comedic timing down pat. If your kids are fans of the show they movie will deliver…well, a longer episode.

The second group who will get a kick from the film is geeks. DC and comic book fans will find plenty of in-jokes and references aimed specifically at them. Much of the film functions as a jab at the superhero movie trend that has been dominating Hollywood the past decade. This stands as the only DC movie to feature a Stan Lee cameo, because Stan Lee loves cameos. The ‘Batman v Superman 2’ sequence shows that DC can at least laugh at one of their most notorious missteps. The casting in itself is part of the joke, with Nicholas Cage finally getting his chance to play Superman. 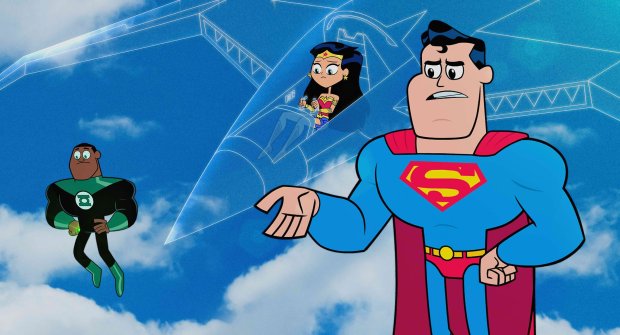 Back to looking at it as an actual movie, it’s hard to see how they justified this as a cinematic release instead of a streaming or DVD original. As entertaining as it is, it’s clearly cheaply made and doesn’t say anything of substance in parodying the superhero genre.

Oh, I almost forgot…the movie was proceeded by a short animated film about Batgirl. There’s nothing wrong with this in principal…Pixar and Disney have released some very good shorts. But this one was an almost shot-for-shot remake of one of the Super Best Friends Forever shorts created by Lauren Faust. Why…did they do this?

If you’re looking for a laugh or don’t mind the young ones enjoying some crass humour, this is amusing enough. It’s certainly not art though.

Rating: FIVE out of TEN

One thought on “Movie Review: ‘Teen Titans Go! To The Movies’”