Sometimes the creative forces behind television shows aimed at children look to spread their artistic wings and deliver an episode which delivers an emotional gut punch. Whether we want to admit it or not some of these shows intended for younger viewers hit us hard even as adults. 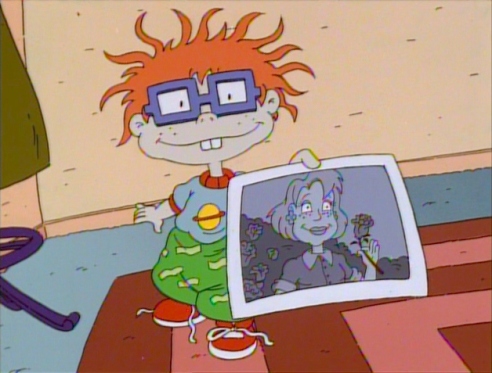 Mother’s Day (Rugrats): Throughout the Golden Age of Nickelodeon’s most popular Nicktoon there was one question viewers had, “Where was Chuckie’s mom?” When the creators decided to answer this question it was in a way that was beautiful and heartbreaking at the same time. The episode “Mother’s Day” was split into two intertwined stories. In the A Plot we see the Rugrats gang we have come to know and love. On this holiday they decide to get presents for their mothers, the problem is that Chuckie does not have one, and despite Angelica’s horrible efforts that’s a void that needs to be filled. On the B Plot of the episode we have the Rugrats parents and Chuckie’s father, Chas, is coming to grips with the fact no matter how much he wants to protect his son from the heartache he has to tell Chuckie what happened. When Chuckie finally shows his father the picture of his mother, the tone of the episode completely shifts and hits the viewer like a punch to the heart. Coerced by the others, Chas is finally honest with his son about the fate of his mother. Rather than wallowing in the sadness of the moment, the showrunners chose to end on a Chuckie who is happy that he has closure and that in the brief time he shared with his mother, she loved him very much. 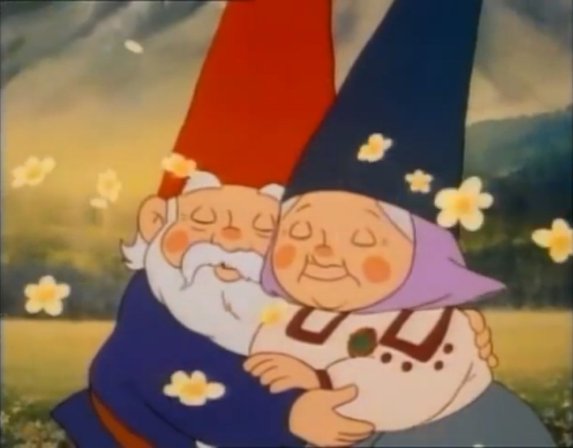 The Mountains of Beyond (The World of David the Gnome): The thing about the children’s shows is the fact the tend not to end, they just keep making episodes until its time to stop. But The World of David the Gnome was given a definitive ending which tugged at the heartstrings of the little ones who watched this show. For years David had been the wise elderly doctor who taught them and entertained them. In this finale they learned that gnomes can only live for 400 years, once this time is up and they must travel past the forest which has been their home. Along the way David, his wife Lisa, and their friend Casper bid a fond farewell to their friends along the way. Remaining with them the entire time is Swift the Fox who stays with them until David and Lisa pass on to the next life after giving Swift a tearful good bye. 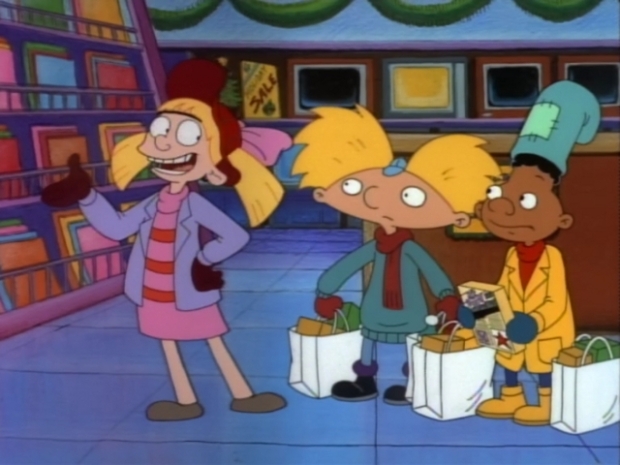 Arnold’s Christmas (Hey Arnold!): Part of the charm of Hey Arnold! came from the fact the main character is an decent and caring kid surrounded by a quirky often strange supporting cast. Despite any insults or ridicule which comes his way Arnold stays the course, and in his first Christmas episode he hopes and prays some of his selflessness rubs off on others. At the boarding house Christmas gift exchange, he draws the name of the aloof Mr. Hyunh. After prodding Arnold learns the only thing the boarder has ever wanted was to be reunited with his daughter. Over the course of Christmas Eve, Arnold and Gerald race against the clock, venturing throughout the city trying to earn the favor of the one man who could help them. As a parallel storyline, Helga racks her brain trying to find the perfect gift for the football headed object of her desire. Needless to say the two arcs intersect leading to a heart touching Christmas reunion. It takes a lot for a Christmas special of any show to hit the right emotional notes without being sappy, and “Arnold’s Christmas” does it all so perfectly. 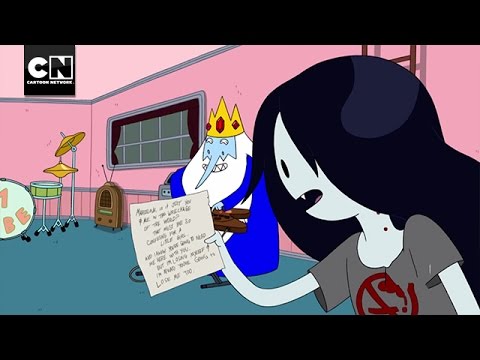 I Remember You (Adventure Time): Despite being ridiculously strange to the point of nonsense, Adventure Time was so successful it became a staple of Cartoon Network. The villain of the show is Ice King a frosty wacky wizard. In the episode “I Remember You” he turns to the the vampire Marceline to help him write a killer new song. Marceline makes no attempt to hide her irritation at his visit but one can not help but notice there is something more beneath the service. As the two jam together they put together they craft lyrics utilizing journal entries and letters from a past Ice King seems oblivious to having. As the two sing their song we piece together a story that Ice King was once Marceline’s friend and protector yet, the crown on he wears is eroding his mind. His letters express remorse that he will no longer be able to remember her, and Marceline shows him the letters in the hopes of sparking something but it does not seem to work. Many have drawn the parallels between the episode and dealing with a loved one with dementia. The fact that he does does not remember this is both exasperating and heartbreaking to her as she tries to remind him of who he is through his own letters. 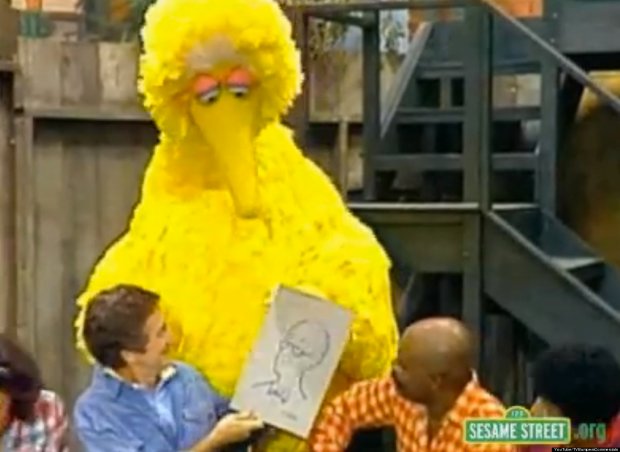 Farewell Mr. Hooper (Sesame Street): From the very beginning of arguably the greatest children’s show ever, Mr. Hooper ran his grocery store and made bird seed milk shakes for Big Bird. But in 1982, Will Lee, the actor who played this role unexpectedly passed away from the heart attack. Rather than pretend he never existed or recasting the role, those responsible for producing the series made a bold stand. They decided Sesame Street would tackle Mr. Hooper’s passing head on. Intentionally airing on Thanksgiving of 1983, so that parents would be home to watch the episode with their kids and have discussions as they see fit. Showrunners  carefully crafted the script and consulted with child psychologists about how to tactfully talk about the subject. Big Bird was the stand in for the young audience wondering what happened to his friend and why the adults were dancing around the subject. Sesame Street pulled no punches as Big Bird processed the complex emotions of losing a loved one despite not fully understanding the situation. 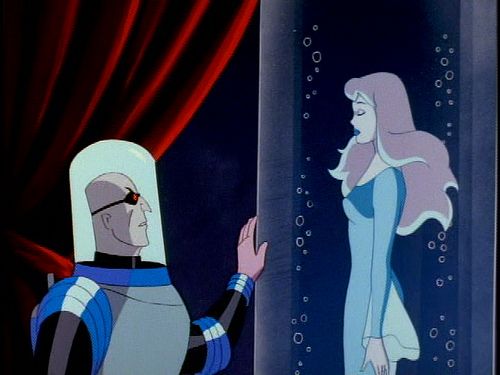 Heart of Ice (Batman the Animated Series): By now it should go without saying that Batman the Animated Series is the greatest action cartoon ever made. One of the keys to its success is it never talked down to the younger audience who watched the show during the afternoon. When introducing Mr. Freeze to the series, they could have done like so many other adaptations of the villain have done and kept him a one note ice themed character. But Bruce Timm, Paul Dini and crew took a very different turn in the episode “Heart of Ice”. When Batman investigates the past of Victor Fries, what he learns is absolutely heartbreaking. Freeze is trying to avenge his terminally ill wife, who his callous employer took off life support and his lab. More than just a one dimensional villain, viewers were shocked and sympathized with the classic Batfoe and pondered if they would do the same in his situation. 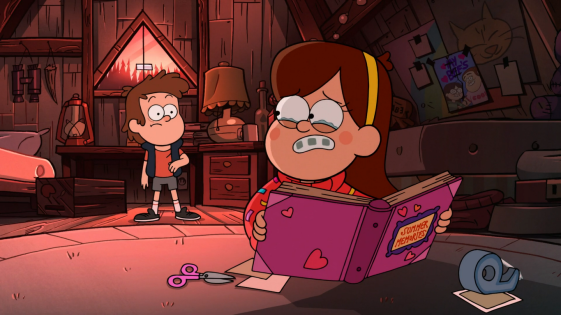 Dipper and Mabel vs the Future (Gravity Falls): As anyone grows up, they realize things may not go as planned. Mabel Pines knew in her heart after a summer in Gravity Falls battling; demons, monsters, ghosts, and countless other supernatural beings, her twin brother Dipper would always be by her side. But this episode splits the Pine twins up as their adventurous summer draws to a close. Mabel learns the upcoming 13th birthday she has been so excited about may not be everything she had hoped for. Further breaking her spirit is that she overhears her Dipper tell their Great Uncle Ford he plans on staying in Gravity Falls as his apprentice. This rips away the one certain Mabel had going forward. Following a confrontation with her brother, the series villain Bill Cypher is able to exploit her emotional vulnerability to launch Gravity Falls into the series endgame. In the end, the credits roll over the tattered remains of Dipper and Mabel’s birthday invitation.

One thought on “Emotional Episodes of Kid Shows”