Plot: Neil Armstrong is an aeronautical engineer who gets selected to man a mission aboard Apollo 11 and becomes the first man to walk on the Moon.

Review: Here’s one thing I want to get out of the way. Damien Chazelle, this is called a ‘tripod’:

If you attach your camera to the top it can give you a stabilised shot, free of the seemingly random shake that plagues First Man. The vast majority of the movie is shot exclusively in handhand close up. There’s a vast array of option available in constructing a visual story, there’s really not need to stick to one shot type.

There might be two reasons for this creative decision. It adds much more tension to the flight sequences, reducing our viewpoint to what Armstrong himself is experience. To this end the technique is effective. You honestly feel the nausea the situation creates, which did lead one or two audience members stepping out of the cinema. The second may have been to evoke a period specific film quality or documentary style, as the colour grading suggests. If it’s the latter than it’s a bit silly.

Fine, enough film snobbery. This movie follows the life of world famous Neil Armstrong, played by Ryan Gosling, in the ten years leading up to his historical first step on the moon. The story begins with Armstrong bonding with and then losing his young daughter, an event which defines his character’s arc throughout the film. This personal connection makes it a compelling character, and begins the emotional disconnect Armstrong and his wife, Janet (Foy), feel as he prepares for a potentially fatal journey. Spoiler – he then succeeds in his mission and walks on the moon.

There’s no character who isn’t pulling their weight in this movie. The actor’s have been directed to keep the emotions subtle. Gosling and Foy both deliver much of their respective roles in a very measured manner. When they do eventually show joy in the remarkable events they experienced it feels very much earned. 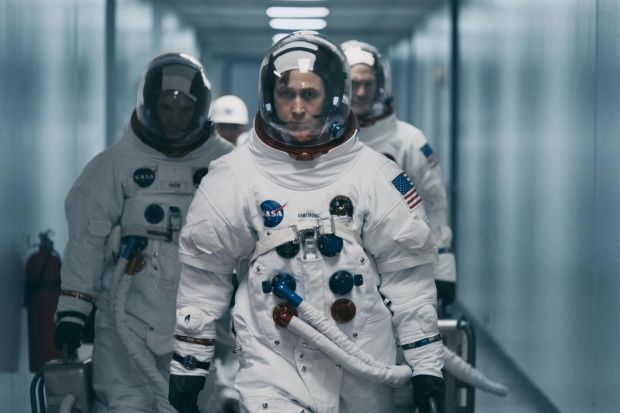 What is also earned is the landing on the Moon itself. The cinematic language for epic space drama was perfected by Kubrick, but it’s nice to see that experimentation is still going on. At times during the final mission it gets spellbindingly good. Seeing it on the big big screen was well worth the effort, as the crisp, clear visuals of the Moon are on a level all of their own.

While the exclusively handheld, close-up cinematography gets pretty old during the dramatic parts of the film, this is an epic story that effectively captures the ambitious scope of the venture. For current generations who only see the Apollo 11 mission as a passage in a history book this may be an eye opener.

Rating:  EIGHT out of TEN