Plot:  A chronicle of the professional and personal life of Neil Armstrong (Ryan Gosling), First Man follows Armstrong during the 1960s as he overcomes personal tragedy to become a NASA astronaut and the first person to walk on the moon.

Review:  Hollywood has produced some fantastic films over the last decade on the topic of space exploration.  Interstellar, The Martian, and Gravity all focused on the majesty of what lies beyond Earth.  Each in its own way was also a testament to human ingenuity and spirit.  However, there hasn’t been a solid piece of cinema regarding the historical aspect of the NASA space program since 1995’s Apollo 13.  While I don’t consider director Damien Chazelle’s latest directorial effort better than Ron Howard’s classic, First Man certainly stands on its own as a unique visual examination of the space program.  Moreover, it is a fascinating biopic that explores the life of a complicated, intelligent, and aloof man in Neil Armstrong.

What I think First Man and Chazelle get right is just how incredibly scary it was to be an astronaut for NASA during the Space Race.  This is a film with a unique perspective in that it puts you in the cockpit of the Gemini and Apollo programs.  The feeling of claustrophobia is palpable.  Every shaky rivet, every spin out, every shot of dwindling fuel supply makes you appreciate not only how brave Armstrong and his cohorts were, but how they were true pioneers.  The USA quite literally brought things into existence and pushed the barriers of science in order to fulfill John Kennedy’s promise.  It’s a true testament to the power of humanity that this event even happened.  (FYI don’t @ me in the comment section with your tinfoil hat theories about how the moon landing was faked.  I won’t respond.)

As I mentioned the space sequences are filmed impeccably, thanks in large part to Oscar winning cinematographer Linus Sandgren.  The problem is (as Gfunk pointed out in his review) that he extends the “shaky cam” aspect to Earth scenes which I found off-putting and unnecessary.  Obviously, this was a conscious choice by Chazelle, but I thought it was one of the few missteps in an otherwise very good film.  (It’s not to Paul Greengrass levels though, thank God.)  I will say that Sandgren’s cinematography pairs perfectly with Justin Hurwitz’s score which is unquestionably epic in scope.  To go from La La Land to this, demonstrates his range as a composer.  Hurwitz won an Academy Award for La La Land and he’s sure to garner, at the very least, another nomination for First Man.  The music during the moon landing sequence had me on edge even though I knew what was going to happen.

The supporting cast in First Man is top-notch especially, Claire Foy as Janet, Neil’s wife.  Her character is the perfect counter balance to Neil, and Janet offers a unique insight into what it was like for the wives of the Apollo astronauts.  Fear for their husbands’ lives must have been something always lurking around the corner.  Yet in spite of this Janet doesn’t shy away from knowing the danger of Neil’s missions.  A scene where she confronts the brass when they cut off her radio signal during a dangerous Gemini mission is even better than you’ve seen in previews.  Ditto her confrontation with Neil just before the Apollo 11 mission where she demands he tell their sons that he might not come home.  Honestly, I think there’s probably a fascinating movie to be made just on the lives of the Apollo astronaut wives alone. 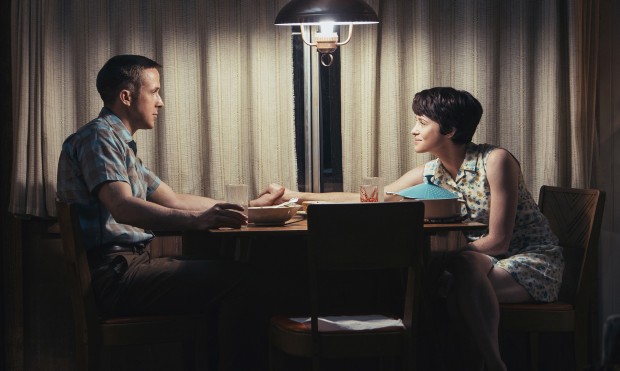 Jason Clarke also makes for a good Ed White, Neil’s neighbor and fellow astronaut.  It’s one of the few strong and fully realized friendships in the film, and makes Ed’s death have that much more of an impact and meaning.  It’s too bad Kyle Chandler gets short shrift as Deke Slayton, NASA’s first Chief of the Astronaut Office.  He’s a great actor but he’s wasted here.  And I have to say I’m typically not a Corey Stoll fan, but he steals a lot of scenes as the smarmy Buzz Aldrin, a guy with no filter and dripping with ambition.  Not a flattering portrayal of the second man on the moon at all, but by all accounts an accurate one.

Above all, First Man hinges on its lead and once again Ryan Gosling proves why he’s the modern day Steve McQueen and one of the best actors working today.  Some have complained that Gosling’s performance is stale, morose, and boring.  I wholeheartedly disagree.  It’s a subtle and nuanced performance that, I believe, accurately depicts a reserved, aloof, guarded, and determined man.  Neil Armstrong was a complex man, someone who saw Apollo 11 as another mission to complete, not a historic achievement.  I think Gosling did a great job showing, through his performance, that Neil Armstrong was not only the right man for the job, he may have been the ONLY man for the job.  NASA needed a calm, cool, collected, and focused person to land on the moon and they got it in Armstrong.

This isn’t to say that Armstrong was a robot and in no way does Gosling portray him as such.  He’s a man haunted by the death of his daughter and his breakdown at her wake, away from prying eyes is powerful, especially weighed against Armstrong’s demeanor throughout the rest of the film.  Gosling shows Armstrong as a man who counts the cost and believes that the cost is worth the risk.  There’s a great moment after the death of the Apollo 1 crew where Bob Gilruth (Ciaran Hinds) asks Neil if the cost is worth it, to which he replies, “It’s a little late to ask that isn’t it?”  To me this was a perfect way of Gosling’s Armstrong saying, “Don’t waste my time with stupid and pointless fucking questions, let’s figure out a solution and land this bitch!”  (At least that’s what I heard in my head, your mileage may vary.)  Gosling is probably a lock for a third Oscar nomination and rightfully so. 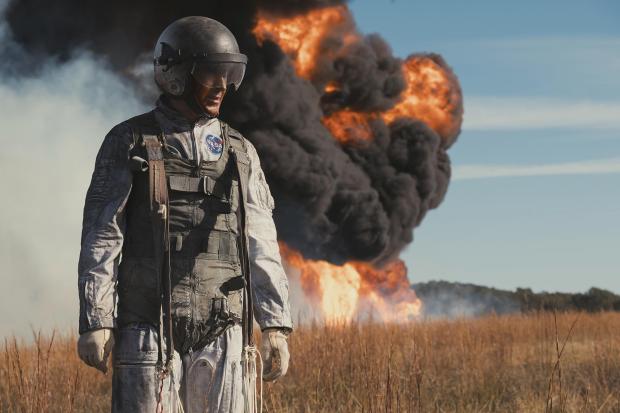 As to the moon landing itself, it absolutely lives up to the hype.  I was enthralled, it was epic on a scale I wasn’t expecting.  I hate the expression, “It’s like you were there,” but in this case it fits.  I felt like if I had the ability I could have walked right through the screen and onto the moon.  It’s that good.

In the final analysis First Man manages to be a stunning visual spectacle and a fascinating look into one of the more complicated figures in human history.  See this on the big screen if you can.  It’s worth it. 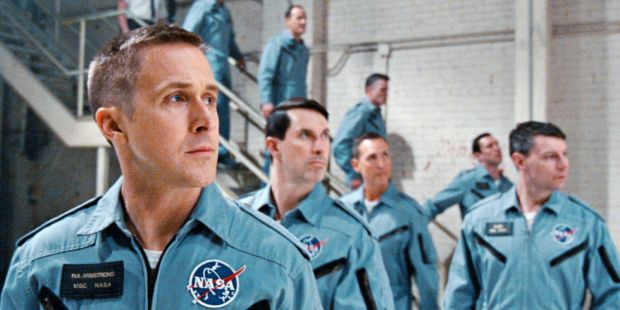