10 Spooky Board Games for Halloween

If you’re anything like me you few every social occasion as a chance to whip out a game and keep the conversation flowing amid some fun, competitive play. With Halloween around the corner it’s a good time to break out some of more twisted tabletop adventures for some candlelight tension and fun! 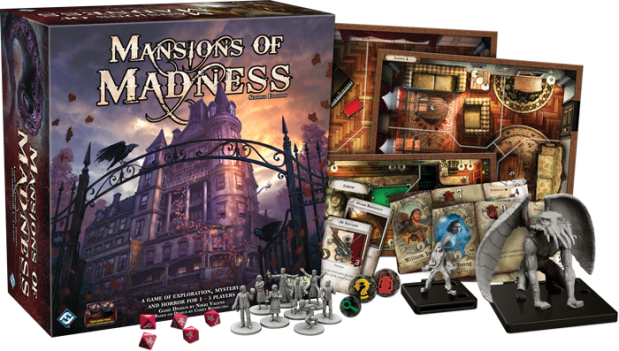 The original Mansions of Madness was fine, but one player needed to run the game for everyone else and it was plenty complicated. Enter the second edition, a revised version that replaces the human game master with an app. Now it’s everyone working together against an invisible entity who will never show you sympathy.

Whilst H.P. Lovecraft’s collection of demented and macabre stories is common fodder for the games industry, this is the game that sticks closest to the source. You play as a group of investigators in the early to mid 1900s, dropped right into the middle of a classic Lovecraft tale. The game, along with it’s expansions, will take you on a tour of Arkham, Miskatonic University, Innsmouth, Dunwich and other locales to face cultists, mad scientists and all manner of madness inducing creatures. In each scenario you have a mystery to unravel and nightmares to face, running the potential of losing either your life or your sanity. 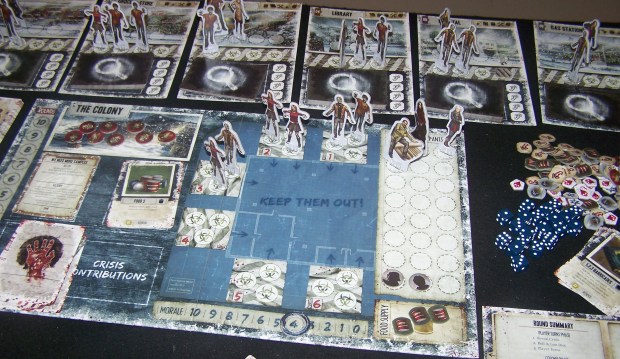 Sometimes the scariest thing we can face is other people…or even the decisions we’d make ourselves when our back is against the wall. Dead of Winter buries the player under insurmountable odds just to see how they cope. The world has been overrun by zombies and your clan of survivors is digging in for the winter, along with other groups controlled by other players. Each round is spent trying to find enough food to eat, scavenge enough supplies to manage the shelter, hold back the ever increasing hordes and, most importantly, watch their backs. Every player will have their own secret objective and it may not align with what’s best for the group. Cue players hoarding food, medicine and weapons for their own needs, potentially leaving their allies out in the cold.

This is a high stress game. Spending an entire turn facing the dangers of exposure and the hungry undead to rummage around the abandoned nearby town may prove entirely fruitless. Perhaps you’ll stumble upon a group of children holed up in the school and not want to bring them to shelter because you’d have to share your supplies. One time we found a starved horse wandering the street and had to chose between rescuing it, providing it with food in exchange for safer travel, or adding it to the food supply. It’s grim business. 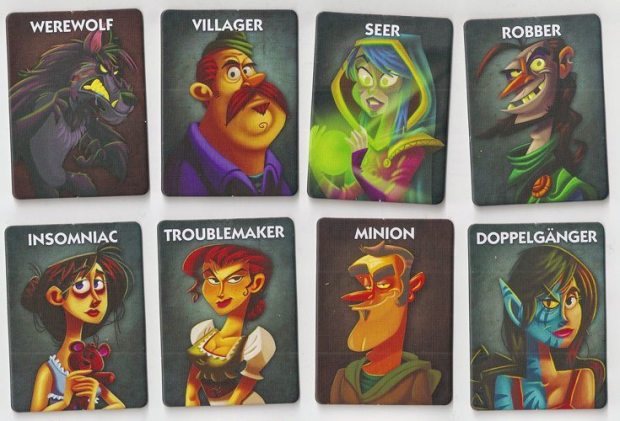 Maybe it’s time for something a bit more…goofy. This is a handy one for a large group. Reworking the classic ‘Werewolf’ formula, it boils down to a single night and round of questioning. Each person at the table gets an identity card which will identify them as a werewolf or a villager and, in the case of the latter, what their job is. With their secret roles determined they’ll “go to sleep” and, following instructions of a game master or an app, open their eyes to perform role specific actions. These include peeking at other cards or switching some. Either way, when everyone ‘wakes up’ nobody is going to trust each other and someone is getting lynched.

See also: Secret Hitler because being Hitler is scarier than werewolves. 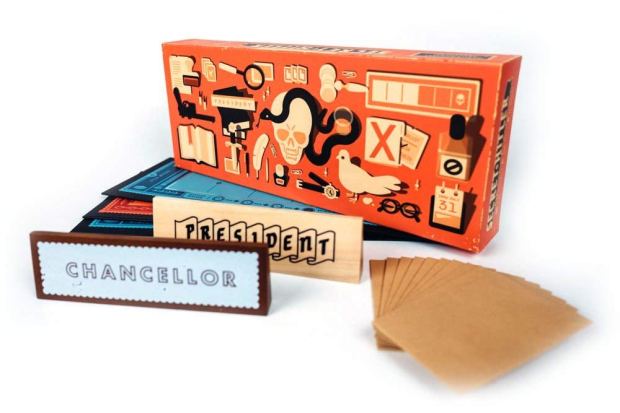 Few historical figures create a sense of dread like Jack the Ripper, the unidentified serial killer who butchered women right under the noses of the authorities on the streets of London. Or more specifically, Whitechapel. This asymmetrical game puts one player in the boots of the Ripper and challenges everyone else to track him down. In each round the murderer will secretly move around the map while the police try to pick up his trail. When player the killer it’s hard not to gloat as you slip through their fingers, smugly announcing when you’ve made it to your hideout. Include the optional replicas of Jack’s taunting letters to the police and newspapers for extra creep factor.

See also: Last Friday for a 1980s slasher version of the same concept. 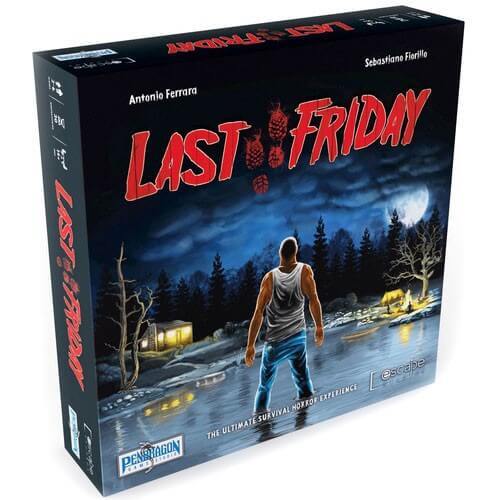 5. BETRAYAL AT THE HOUSE ON THE HILL

Scoring points this year for it’s obvious influence from The Haunting of Hill House, the consistently popular Betrayal… draws upon dozens of classic horror stories with a randomisation mechanic that means you don’t know what you’re facing until it’s upon you. Up to six players are here to explore a creepy old house (that’s on the hill) for reasons that are never really explored. They’ll find helpful items and all manner of spooky occurrences. The random layout of the house and tile system ensures that it’s never the same layout twice, and the discovery of ‘Omens’ can come at any time.

With every Omen found you roll the dice. If you roll less than the number of Omen’s found then the Haunt begins. The triggering Omen and it’s location of discovery will determine which of the 50 horror stories you’re trapped in, and which member of the party is the back-stabber. Werewolves, aliens, cannibals, serial killers, games of death, voodoo rituals, witches, vampires, demons…there’s a massive amount of variations coming your way. 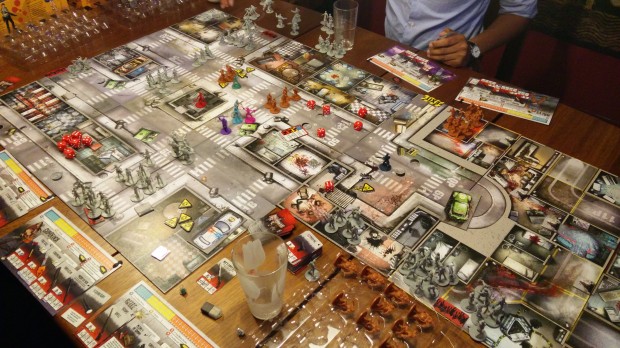 You all saw this one coming. This modern blockbuster is your game of choice if you prefer Resident Evil over Silent Hill. You’ve got a set of goals to complete while working together to hold off an ever increasing onslaught of the undead. You get a selection of action-horror standards and pop culture references to play as and have to explore the streets and buildings to complete your objectives. The key factor is escalation – the odd zombie shuffling your way is no problem and sooner than you expect they’ll be so many enemies that you can’t fit them into the spaces.

7. A STUDY IN EMERALD

Time to revisit our friend H.P. Lovecraft, by way of…um…Sherlock Holmes and author Neil Gaiman. Some time ago living legend Neil Gaiman (known for Sandman, American Gods, Stardust and Good Omens) penned a clever short story called A Study in Emerald, an alternate history horror mystery wherein an unnamed detective and his sidekick investigate the murder of a member of the royal family. Except in this world the Old One’s have risen and conquered the world, filling out world leader roles. It’s smart, fun and remarkably detailed for such a short piece of writing.

This game expands on the world created by Gaiman and sees players building influence in order to gain control of various cities. Through their influence players can build a stronger deck to score points. But who is playing which side? Who is supporting the human race and who is enthralled by the Old Ones? That will only be revealed when it’s too late.

See Also – The Doom That Came to Atlantic City: a reverse Monopoly where players stomp around the titular city as the Old Ones recruiting cultists and destroying buildings.

Sick of zombies? This is a horror game that makes a point of not including any. Rather it draws it’s influence from popular horror and slasher films from the past 30 odd years, so expect analogues for Michael Myers, Chucky and Pinhead while you play as stand ins for Ripley, Ash and more. It’s much more challenging than the similarly styled Zombicide as the (frankly disturbing) monsters are heavily stacked against you and they just keep on coming. If you’re the type of horror fan to pick every reference in Cabin in the Woods then this may be for you. 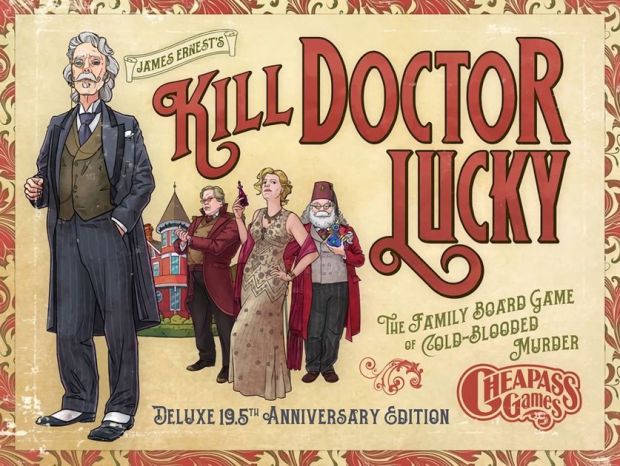 In the same way that The Doom That Came to Atlantic City is a reversal of Monopoly this entry into the list is a reversal of Cluedo (or Clue if you’re stateside, which most of you are I guess). You’re in a sprawling manor packed with potential murder weapons. The difference here is that instead of looking for a murderer you are looking to become one. Doctor Lucky is the owner of the house and all his guests have a reason to bump him off. As the guests, players move around the mansion trying to be in the right place at the right time with the right weapon to deliver to the killing blow. It’s goofy and the motivations for murder are silly, as are many of the weapons, but if you prefer your Halloween tongue-in-check then this is for you. 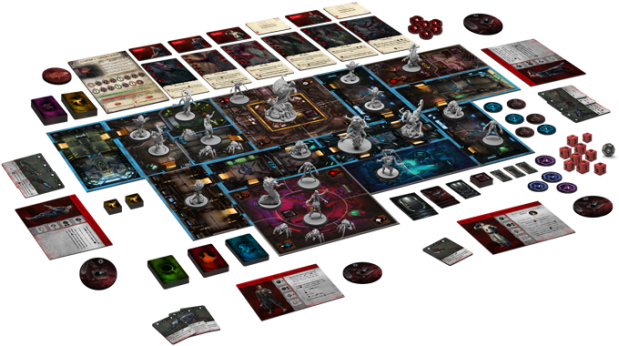 This lands the last spot on the list because…well…we haven’t played it yet. But we have it, fresh off the Kickstarter production line. And it looks awesome. It’s an RPG in a box, much like Zombicide, but it places Lovecraft’s (we did say it’s a popular source for games) creatures and lore into a nice, new setting. Players are trapped in a deep ocean mining facility that has dug deep and unleashed some genuine horrors. As the evil spreads the characters begin losing their minds and the physical environment gets corrupted. What we’ve seen so far are trays of gnarly looking minis and some fantastic artwork. Looking forward to trying this one!