For centuries myths and legends about werewolves have pervaded throughout society. 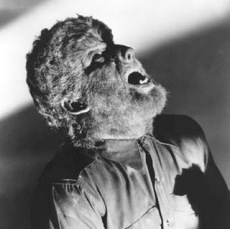 As Universal Studios pulled from the legendary monsters of the past to fill out their famous Universal Monsters franchise, a werewolf proved to be a perfect fit alongside the likes of; Dracula, Frankenstein’s monsters, and the Mummy. Their first attempt came in 1935 with Werewolf of London starring Henry Hull and Warner Oland, but it was there second attempt to bring lycanthropy to the big screen which proved to be a hit and became a landmark film. Written by noted horror writer Curt Siodmak and directed by George Waggner this 1941 movie was the Wolf Man.

The film starred Lon Chaney Jr., the son of silent era legend Lon Chaney, as Laurence “Larry” Talbot a man who had come home to his father’s English estate in the wake of his brother’s death. While he tries to patch things up with his father, the people in the local  town treat Talbot as an outsider in their midst. Despite this Talbot does catch the attention of Gwen, an employee at a local shop who sells him a rather unusual cane bearing a silver carving of a wolf and pentagram on it. He decides to treat her to a trip to see the fair being held at the nearby gypsy encampment, for his efforts at being a

romantic he is attacked by a large wolf on his way home. This is the starting point of a change which strikes Larry as he begins to act strangely to the point of ultimately believing he is turning into a wolf when “the wolfbane blooms and the autumn moon is bright”. Of course this is dismissed as nonsense, but the fact that a monster is terrorizing the region at night does not go without notice. In order to put in end to the violence the town forms a posse hunting the werewolf in their midst. It all leads to a climactic confrontation between father and son in a dark forest where one way or another things have to end.

Right off the bat the biggest contribution the Wolf Man was solidifying the association of the full moon with the werewolf mythos. Transforming into a wolf was more often than not associated with pacts with the devil or acurse, but this film would take the idea of the moon triggering the transformation and make it the definitive source of a werewolf’s power. Needing a way to kill the beast, screenwriter Curt Siodmak also introduced the idea that werewolves were vulnerable to silver, a tradition which has also continued on. Many believe these hallmarks of monster lore to be centuries old ideas when they in fact were pulled from this 1941 movie. One source of inspiration Siodmak was never shy

about was Nazi Germany. As the Nazi war machine tore through Europe, their soldiers were quite fond of the wolf as a symbol of nationalistic pride. Given that they were the real monsters the world was facing at the time, it made perfect sense to turn them into a fictional monster.

Originally the film was intended to be a psychological based horror flick with Boris Karloff in the lead. It was to focus on a character who believed himself to be a werewolf while everyone else would simply think the protagonist was simply troubled. This would create an uneasiness with the audience as they debated whether or not this man really was a monster. Siodmak had even penned a climactic scene where it was revealed Karloff had been a human all along, but when he looked at his reflection in a puddle he would see a wolf staring back at him. Eventually it was decided that fans of Universal’s stable of monsters did not want deep thought-provoking terror, they wanted terrifying monsters stalking the European countryside. While the Wolf Man was changed to reflect this, elements of the original idea did make their way into the final product.

Just because they chose a different route does not make the Wolf Man any less thrilling. This is due in large part because we feel for the characters on the screen and care about their plights. Though all the monsters of the Universal films had been sympathetic outsiders, Larry Talbot was undeniably human which set him apart. He had his own demons to fight before he even became a monster in the film. The movie gives us just enough to know Talbot’s backstory, we know he has been estranged from his father for many years, considering he has an American accent while his family is British, we assume he has been in the States for many years, away from his family home. Despite it all Larry Talbot is a likable enough guy who does nothing to deserve the curse he falls into, in fact becoming a werewolf seems to be his “reward” for nobly protecting others from a wolf attack. This sees him thrust into a world he does not understand, of gypsies and monsters and magic. He eventually accepts what he is and that he must be stopped, but his father who could stop him believes Larry is simply delirious. Without help, he continues to transform into the Wolf Man by night and slaughters the innocent.

For Lon Chaney Jr. the Wolf Man proved to be his breakout role and he would remain with the character for years, often referring to the Wolf Man as his “baby”. For years Chaney had been building his own career in Hollywood, even turning in a particularly acclaimed performance as Lennie in Of Mice and Men. But inevitably given his heritage monsters were in his blood and it was not long before he followed in his father’s footsteps. Granted that Chaney got into acting against the wishes of his father, many have speculated if he drew from personal experiences in his tortured performance. Realizing this was his first chance to lead a movie, Universal and director George Waggner ensured he was supported by a top tier cast. Filling out the rest of the roles in the Wolf Man were established talents like; Claude Raines, Bela Lugosi, Ralph Bellamy, Maria Ouspenskaya, and budding horror favorite Evelyn Ankers. Also making Chaney look his best was a man behind the camera, make-up legend Jack Pierce. Pierce was the make-up guru who had created all of Universal’s famous monsters and the Wolf Man

featured some of his best work. Through time consuming efforts and tried and true methods which were quickly falling out of style, Pierce created an absolutely terrifying werewolf which to this day still looks fantastic. Given that Chaney Sr. was the godfather of movie make-up and Chaney Jr. was banned by the union from so much as picking up a brush, Pierce would mock the actor mercilessly about his inability to follow in his father’s famous footsteps. This created hefty personal tensions between the actor and the artist which lasted until Pierce was unfortunately fired by Universal.

The Wolf Man proved to be a shot in the arm for the Universal Monsters franchise and proved these fearsome characters were still popular with audiences. This led to more movies featuring the other monsters as well as teaming them up to create moviedom’s first cinematic universe. Needless to say every werewolf movie which followed owes a debt to the Wolf Man as it’s influence can be seen throughout the genre. Unlike fellow monster actors, Lon Chaney Jr. would be the only person to play the Wolf Man throughout the run of the Universal Monsters franchise cementing his attachment to the genre for the rest of his career.

One thought on “Retro Review: ‘The Wolf Man’”