The Golden Age of Horror Movies was responsible for giving us some of the most iconic monsters to ever grace the silver screen as the genre was pioneered by a new class of filmmakers. Of all the movies of this era, one of them still stands as one of the greatest

American films ever made, 1935’s the Bride of Frankenstein. A sequel to 1931’s Frankenstein, Universal spared no expense in making this one of the grandest productions in their history. This was due mainly to their desire to see a follow-up to one of the most successful movies ever released, but also because they were desperate to have James Whale return to the director’s chair. After the original classic Whale was content to move on to different projects such as the Invisible Man and Show Boat, but the Laemmle family who ran Universal continued to try and lure him back to Frankenstein’s lab. Finally they offered the legendary filmmaker complete creative control on the project, and that proved to be too good of an offer to turn down.

The Bride of Frankenstein picks up after the events of the original film, with some alterations to the continuity. Dr. Henry Frankenstein has seemingly vanquished his creation and taken on the role of Baron. As he hopes to settle into a normal life, a disgraced mentor from years ago, Dr. Pretorius arrives with hopes to collude with Frankenstein to further experiment in creating life. Unbeknownst to his creator, the monster has survived, but rather than carving a path of destruction as people seem to think he will, the creature is searching for fulfillment and a meaning to his existence. Inevitably Frankenstein and his creature, cross paths and the monster demands his maker create another being like himself, only this time a woman.

As mentioned earlier the Bride of Frankenstein is held to this day not only as one of the great films of the 1930’s but one of the greatest films of all time. Even today eight decades later, this horror classic still remains relevant and the production values still hold up to contemporary audiences. This is in large part due to James Whales’ vision as a filmmaker and the freedom granted by the studio. Everything looked and felt grander in this movie; Frankenstein’s family mansion was now a cavernous castle and his lab has outgrown the prison dungeon and takes up an entire castle. His influence from the German Expressionist artistic style is still clear in the sequel as in the original, only this time he cranked it up to another level. A grander look of the film was not the only thing Whale brought to the table, Bride of Frankenstein is also filled with the director’s sardonic wit throughout. As many have pointed out over the years, comedy and horror go very well together and play very well to audiences already with heightened emotions. Some of the

most memorable moments of Bride come from the gallows humor to be found. Many of these jokes act as clever jabs at intolerant bigots and organized religion, done so well that they snuck past the censors of the day. As one of the first openly homosexual filmmakers in Hollywood, he blazed a trail and proved to everyone that he was one of the great directors of his era. Tragically after the success of this film, the director turned his attention to the Road Back, a sequel to the  war classic All Quiet on the Western Front. Despite rave reviews, the powers that be cut his film to pieces before release in order to appease representatives from Nazi Germany’s consulate in Hollywood. Understandably this caused a rift between Whale and his bosses and he ran out the rest of his contract making low budget B-movies before retirement.

After the original Frankenstein, the celebrity status of its monster Boris Karloff shot through the roof. He now not only had top billing for this sequel (and not just as a question mark as was used in the first film) but he was famous enough that his last name alone was enough to sell the picture. With Boris Karloff’s new notoriety he was given a much bigger role in Bride, which he took full advantage of. The British acting legend gives a beautifully soulful performance as a creature who evolving and growing over the course of the film. Given the incredible physical, emotional, and spiritual journey Frankenstein’s monster embarks on it truly needed a gifted actor like Karloff to pull it off. A new key element to the character which emerges in Bride is the creation’s newfound ability to speak. This comes after a particularly emotional segment wherein the creature finally finds compassion in the home of a blind hermit who cares for him and teaches him until society rips them apart. Once again the actor is greatly added by the make-up fx pioneer jack Pierce who was once again charged with turning a dapper Englishman into a monster stitched together from cadavers. This proved to be arguably Pierce’s best work in his distinguished career, because not only did he have to adjust to Karloff’s fuller physicality but the make-up itself changes over the course of the film. When Bride of Frankenstein begins, the monster is still carrying the scars from the fire which was supposed to have killed him. As the film progresses, we see these wounds begin to heal creating a synergy between the character’s physical and emotional evolution.

Joining Boris Karloff in returning from the previous picture, was Colin Clive as Henry Frankenstein. Despite clashing with the ending of the previous flick, he now holds the title of Baron Frankenstein, but his melancholic performance tinged with a bit of craziness remains the same. Valerie Hobson, who had taken the role of his wife Elizabeth, was shocked at Clive’s infamous alcoholism, but it was believed his substance abuse drove his manic portrayal of the character. The only other actor to return from the original is cult horror icon Dwight Frye, who instead of reprising his part as the hunchbacked assistant Fritz (who died in Frankenstein), he is playing a brand new character named Karl. Acting in a Mephistopheles-type role is Dr. Pretorius played by the scene stealing Ernest Thesiger. His nefarious character is not particularly well-rounded nor does he need to be, everything from his appearance to his sinister mannerisms 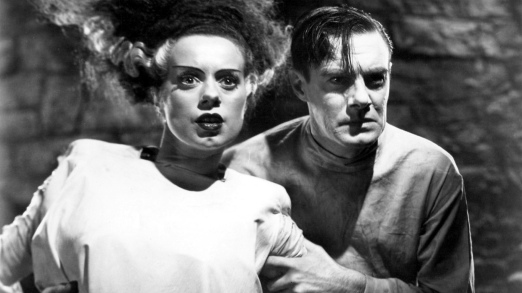 convey that his job is to tempt Frankenstein back into the role of challenging God himself with his unnatural experiments. It is quite obvious that Thesiger is absolutely relishing this role, and it is hard to imagine anyone else pulling despite the fact he only got the part because Claude Raines was unavailable. Of course the Bride of Frankenstein also introduced audiences to one of the most iconic monsters in movie history, indeed I am referring to the Bride herself. Even those who have never seen this film recognize the woman with lightning struck beehive. In the design of this creation, Jack Pierce wisely took an alternate route than he did with Karloff and gave actress Elsa Lanchester a simple but striking beauty make-up. The score of legendary composer Franz Waxman, took on a softer touch when the character was introduced as well giving her appearance an auditory influence over her scenes as well as a visual one, truly rewarding audiences who had waited anxiously for the Bride to make her debut.

There is little doubt that the Bride of Frankenstein is not only the crown jewel of the Universal Monsters franchise, but one of the greatest films ever made. It is a grand epic of gothic horror, fused with a morbid sense of humor. What could have easily been a shallow monster movie is turned into a beautifully directed look at; society, spirituality, and science through macabre lenses. It is a tragedy that the physical, emotional, and spiritual growth Frankenstein’s monster undergoes is wiped away in the follow-up Son of Frankenstein. Nonetheless his character arc captivates audiences over the duration of the film. Bride of Frankenstein serves as the peak in the career of a gifted director who changed cinema.

← The Biggest Reason Not to Use Kickstarter
Book Review and Casting Call: Into the Drowning Deep (2017) →