Every November fans of classic cinema celebrate one of the great genres of filmdom, the film noir. These beloved films ensure fans get their fill of; gritty streets, tough detectives, mysterious femme fatales, dangerous villains, and a unique moody style. This month I will be looking at some of the great noir films of all time for what has been dubbed Noirvember. 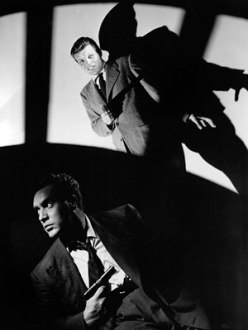 What would you do if you knew your number was about to be punched and you were going to shuffle off this mortal coil? If you are Frank Bigelow in the 1949 movie D.O.A., you try to find out who was responsible and get some measure of payback. This is another example of the hidden gems which came from Poverty Row during the Golden Age of Hollywood. Produced by the short-lived Cardinal Pictures this lurid masterpiece directed by Rudolph Mate` has become a prominent movie of the film noir genre and even holds a spot on the National Film Registry.

Veteran actor Edmond O’Brien, plays Frank Bigelow a businessman who heads off to San Francisco where he finds himself joined up with a rowdy group of revelers. While attempting to score with an attractive woman at a jazz club, he finds his bourbon has been tampered with. Feeling ill, Bigelow heads to the doctor only to discover he has been poisoned with “luminous toxin” for which there is no cure. He is given a week at most before the poison claims his life, but rather than waste away in a hospital bed, Bigelow investigates who would want to kill him.  While remaining in constant contact with his love-struck secretary, he discovers this may have something to do with an old client, who either committed suicide or was murdered. Along the way he has to deal with secretive businessmen, greedy crime bosses, and a sociopathic gangster named Chester.

The film grabs your attention from the start as it features O’Brien walking into a police station and telling the detective he wants to report a murder….his own. This is the kind of start which grabs the audience and does not let it go. Director Rudolph Mate` proves

to be an expert at letting the tension build throughout the movie, all along knowing that the protagonist is living on borrowed time. He portrays Bigelow as a fish out of water in San Francisco; he never seems comfortable at the jazz club and you can tell he is uncertain with how to deal with the crime boss Majak in one of the movie’s most memorable scenes. To further the character’s alienation, Mate’ has O’Brien stumbling through the streets while passer-bys stare at this seemingly troubled man. This was achieved through the simplest of all filming techniques, by secretly filming on legitimate streets capturing real reactions of those walking by.

Led by future Oscar winner Edmond O’Brien, the entire cast delivers in D.O.A. Television legend Beverly Garland makes her screen debut in this picture as a secretary seemingly keeping the secrets of her boss. While not the overall bad guy of the movie, character actor Neville Brand is a standout as the gangster Chester. Chester is a sadist who clearly is not right in the head, and his encounters with O’Brien leave us truly worrying whether or not Bigelow will be killed by this guy before the poison in his system kicks in. Pamela Britton of My Favorite Martian fame plays, Bigelow’s secretary who is madly in love with her boss and willing to do whatever is needed to help him during his investigation, despite not knowing the whole story of what is going on. 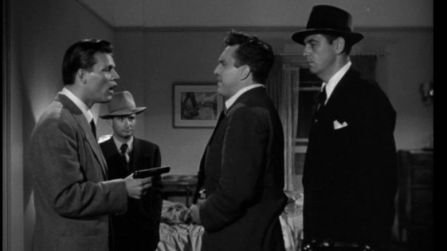 The plot may be intricate and difficult to follow, but numerous movies of the film noir ilk are the same way. D.O.A. is expertly crafted and carried by a gifted cast especially Edmond O’Brien in the lead. Following a protagonist who already has his fate sealed makes for an interesting touch to the story and adds a great deal of tension, given the strict time table worked with here. Be sure when you are creating your list for Noirvember to remember D.O.A.