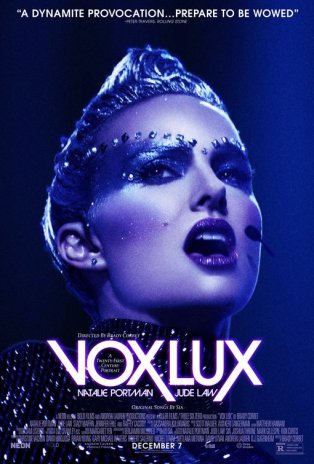 Plot: After a traumatic event, a teenager skyrockets to pop music fan

They are hot air set ablaze so we can admire them from a far while they slowly but surely burn out.

Our popstars aren’t much better. The fame and fortune that comes from hitting the Top 40 is often seen as the ultimate reward for talent and hard work, and when it is stripped away from our fame-seeking heroes it is because they self-destruct. If only they could say no to the next drink. Or the next drug. Or the next lay. On and on. There is still hope in some of these stories that if one can simply control themselves, then you would forever be a fixture of music.

Vox Lux is a tad different. Art, success, self-destruction, and tragedy are intertwined. It is a rich tapestry of events that don’t always make logical sense. It is not just cause and effect. It can be predictive and coincidental as well. It’s messy, especially for Celeste.

Celeste (played as a teen by Raffey Cassidy and as an adult by Natalie Portman) is a pitch perfect model of a popstar. After a traumatic event, she makes headlines with a heartfelt memorial song (that she didn’t write). It shoots her to fame quickly, forcing her to grow up fast when the late night parties full of drugs, booze, and sex fill up her free time. Fast forward to her adult years, she slinks through life with a constant hangover except when she is on stage, where she is able to shine bright. She fights with: her daughter (also played by Raffey Cassidy), her sister, her agent, and reporters, trying to keep her delicate privilege intact.

Portman makes some interesting choices here. She speaks with a laughably over the top New York accent. The kind we all say when we mockingly say “fuggedaboutit,” so it can be pretty easy to miss some of the more nuanced work she is doing. Portman drapes Celeste over the barrier between fake and authentic, which makes each emotional moment all the more impactful, as well as a little suspicious.

It is as if filmmaker Brady Corbet collected the worst tabloid headlines he could find and arranged them as an odyssey through America in the internet age. He picks up a filthy warped mirror to reflect back on us the narcissism inherent to being an audience member. It allows us to both idolize the pop culture icons that might as well be a million miles away and cut ourselves off from the growing violent apathy that is creeping into our neighborhoods. It depicts stardom as something passive, something that sweeps you up rather than a way to make waves.