Retro Review: Mountain of the Cannibal

films was cannibals. It must have been fairly easy to convince cast and crew to venture into wild jungles to film these envelope pushing flicks. This strange trend in cinematic maneaters  saw movies like; Cannibal Ferox, Jungle Holocaust, Eaten Alive, the infamous Cannibal Holocaust and the 1978 movie we are looking at today Mountain of the Cannibal God also known by it’s US release title Slave of the Cannibal God.

When her husband goes missing in the foreboding jungles of the Amazon, Susan enlists the help of explorer Professor Foster to help find him. As if the treacherous terrain and wildlife of the jungles are not dangerous enough, the threat of a nearby cannibal tribe looms large over the expedition. Enduring numerous dangers and even picking up a new companion in Manolo, we begin to learn that Susan’s intentions may not be as noble as we once believed. But that proves to be an insignificant once the group finds themselves at the mercy of the cannibals who dwell in the mountains.

Make no mistake Mountain of the Cannibal God had just as much cringe-inducing; violence, animal cruelty, and gratuitous sexual elements as the other cannibal films of it’s kind. But what this movie did feature which set it apart is star power in the cast. With the two leads being the most famous Bond girl of all in Ursula Andress and noted character actor Stacey Keach, it gave this production a bit more legitimacy than it would otherwise have had. Keach especially turns in a good performance because it is hard to

imagine anything else from him. Though in the case of Ursula Andress the reason for her casting in the lead is abundantly clear as the movie heavily promotes her held as a vulnerable captive to the cannibal tribe of the mountain. Though in the climax of the film when Susan is proven to be a all along more concerned with finding uranium to sell on the black market than finding her husband the actress pulls off the switch very well.

To give the movie it’s due, Mountain of the Cannibal God does not descend into the depravity of many of the other cannibal exploitation flicks of the era. Though as an animal lover seeing the requisite animal cruelty scenes was difficult. Director Sergio Martino truly takes advantage of the lush jungles and scenery afforded to him by filming 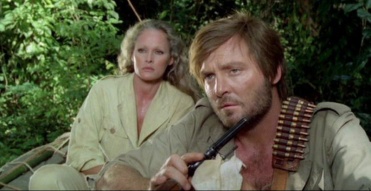 in Sri Lanka. The way he displays the beauty and horrors of the region are top notch and if cult films had not proven to be his calling, Martino would have been a good nature documentarian. The plot is also more thought out than the standard “white explorers held captive by human eating natives” as there are some nice twists and turns and the characters are given a nice amount of depth. If you are looking for an entry level film before diving into the demented world of cannibalsploitation this is the perfect flick to do so with. It has all of the hallmarks of the subgenre but is at a high enough caliber that it does not delve into the horrors as hard as the other films of this type. Considering what this is Mountain of the Cannibal God succeeded perfectly at what it is trying to be.