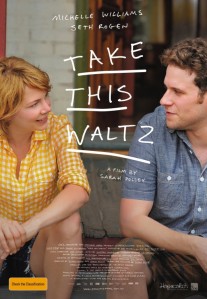 Plot: A married woman starts an affair after a chance encounter on a plane.

Margot (Michelle Williams) is a freelance writer who is on assignment rewriting the brochure for a historical reenactment venue. While there, she meets a charming man, Daniel (Luke Kirby). By coincidence, they are seated next to each other on the same plane. They also just happen to be neighbors. They both seem very smitten with each other, but Margot has a husband, Lou (Seth Rogen). Lou is a chef in the middle of writing a cook book based around chicken.

Rogen and Williams relationship is defined by their short hand conversation and their esoteric gestures of love. They are adorable together. They come off as a very honest depiction of love, but when Rogen starts focusing on his work or stops her sexual advances because he had things to do, Williams immediately thinks something is wrong. The most interesting scene and telling of their doomed relationship involved the two of them on a date for their anniversary. They were sitting at a restaurant in silence. Rogen seemed to be enjoying in it, or at least he didn’t find it uncomfortable, while Williams was the exact opposite trying to fill the dead air. It reminds me of the Jack Rabbit Slim’s scene from Pulp Fiction when Uma Thurman implies people find true love when the two of them can just sit and enjoy the silence.

In contrast, Williams and Kirby’s relationship feels like the ideal Hollywood sex story of two young good-looking people who sell each other on multiple orgasms disguised as a true connection. They literally have nothing to discuss. There is no short hand to their lives even though Williams tries to force the issue. She can never get the same fun response she does from Rogen. The only time they really seem to have fun is when they visit a cheap rollercoaster ride. It is an obvious metaphor for sex. They start grinning like school children before they just start staring intensely at each other. Then the ride ends, they come down from their high, and there is like a second of regret. Their relationship is only concept feeling forced and lacking chemistry beyond basic drunken flirtation. Us as viewers can see this clearly even if the characters cannot, and it ends up hurting to watch on a visceral level. That pain can really cloud our judgment when rating this movie. I am certainly having a hard time looking at it unbiased as I loved Rogen and Williams together so well, but the movie isn’t trying to make you sympathize or empathize with the characters. It is writer/director’s Sarah Polley’s vision of realistic love.

Polley’s vision of sex, romance, and intimacy is full of hypocrisy and double-thought, yet by design. These feelings can be and usually are so much more complicated than we want to admit or possibly can admit. In Williams’ world, her husband has moved on from the “always horny and can’t believe this woman wants to have sex with me for the rest of our lives” stage and seeks the attention of a stranger. And even though the 2 spend a lot of time together, he really does stay a stranger to us. He is only ever defined for his first impression/attraction to Williams. It’s not a question of whether the love is gone in Rogen and Williams’ relationship, but rather the attention/attraction having too much instinctual power over us.

An extension of this is Williams’ quote: “afraid of being afraid.” It seems to me to imply that people want to always be in a safe place. This concept first rears its head when Williams fakes a back injury so that they can rush her to her connecting flight. What she was actually afraid of was possibly missing her flight, not actually being stranded. It’s the stress and anticipation of not knowing. This comes to a head when she can no longer read Rogen’s reactions while another man puts all of his sexual desires on front street. This also extends to a subplot involving Rogen’s sister, played by Sarah Silverman. She is a recovering alcoholic who is also afraid of being afraid killing that stress by numbing it with alcohol. Silverman gives a great performance injecting her potty-mouthed comedy into someone who seemed genuine and fleshed out.

Take this Waltz is a hard movie to watch. It keeps you on your toes. You can never guess what’s going to happen. The dialog is non-cliché but still lacks a sense of naturalism. It makes up for it by being incredibly charming and delivered by actors who are all on top of their game. It’s not the feel good movie of the year, but it has some really interesting things to say about intimacy. 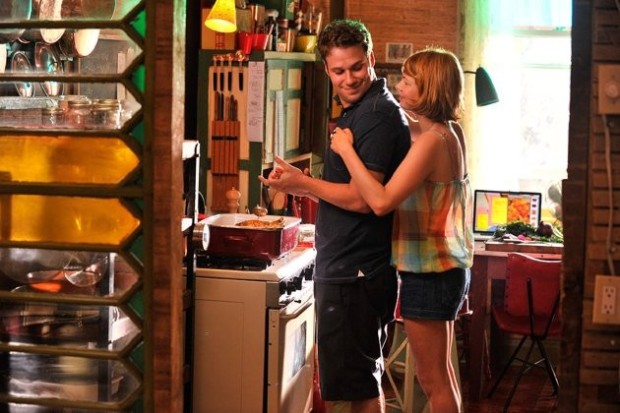 One thought on “Review: Take This Waltz”