Last week we compared the two versions of Dawn of the Dead and found that…well, they were both pretty good. There’s going to be a lot of horror coming up in this series, but this week we’re looking at a classic crime caper featuring the coolest cats in two generations of Hollywood. 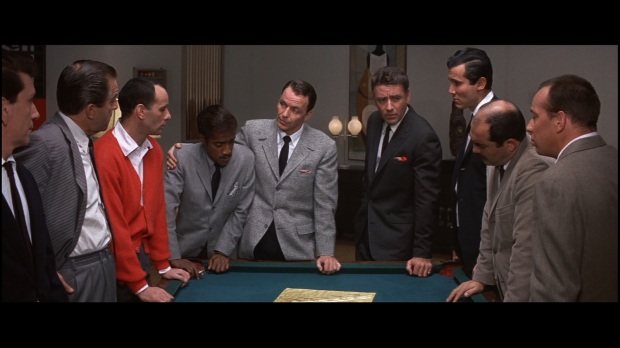 Directed by Lewis Milestone in 1960, Ocean’s 11 was developed from an idea thought up by a gas station attendant. Although originally considered as a film for William Holden, Frank Sinatra took an interest in the project and brought the Rat Pack on board.

Sinatra plays Danny Ocean, a sergeant during WWII, who gathers a team of his former squadron members to pull off a military style heist in Las Vegas. The plan is to blow the power to five casinos on the Strip when the clock ticks over to New Years Eve. Having rewired the emergency lights to instead open the cashier cages, allowing the inside men to find the rooms marked with glow-in-the-dark paint, grab the cash and stash it in garbage cans outside the casinos. Once the lights are back on the thieves stroll outside and wait for their man with the sanitation truck to collect the bins.

Among the team of eleven is Danny’s right hand man Jimmy Foster (Peter Lawford), who relies on his wealthy mother for money and hopes to get up from under her control with the take. He’s also at odds with his future step-father, a reformed gangster named Duke Santos (Ceaser Romero – a few years before he started wearing the Joker make-up). They also recruit their ‘master electrician’ Tony Bergdorf (Richard Conte), the most pivotal figure in the plan, straight from serving a jail term. Bergdorf is reluctant to come on board at first, but having an estranged wife and son he wants to provide for helps motivate him although a doctor does issue him a health warning about his heart.

The rest of the crew mostly hold jobs in the casinos themselves, putting them in position to grab the cash during the brief window the lights will be out, including lounge singer Sam Harmon (Dean Martin). As demolitions expert and sanitation truck driver we have Josh Howard (Sammy Davis, Jr.). Each of these characters have a couple of randomly inserted music numbers to help sell the Rat Pack angle.

When New Years Eve rolls around the heist goes off without a hitch, but afterwards things go astray. Bergdorf suffers a heart attack and dies in the middle of the Strip, leaving Danny feeling guilty for losing a member of his squadron. The casino’s hire Duke Santos to track down the stolen money for a hefty fee. He quickly works out who is responsible when he finds out Foster and Ocean had been seen around town and confronts them both, demanding 50% of the take to stay silent. With police blockades on every street and not wanting to pay Duke, the team plan to hide the money in Bergdorf’s coffin when his widow transports his body back home.

Santos catches up with the gang at the funeral home, but in a final twist they discover that Bergdorf’s widow has chosen to cremate his remains in Vegas rather than pay the hefty fee to transport him. Ocean and his gang witness their millions of dollars being burned along with Bergdorf before dejectedly leaving the funeral home.

Reports suggest that Sinatra, Martin, Davis and company were more interested in partying in Las Vegas rather than putting their all into the movie. Allegedly the moment the clock struck 5pm they were out the door and on to the casino floor, partying hard and turning up worse for wear the next day. This is especially believable seeing the final product, as many scenes look like the first take. On occasion Sinatra looks bored being there, and there are minimal camera set ups in many of their main scenes. The film is littered with extraneous characters and plots to fill out the run time. A long sequence after the heist essentially boils down to Ceaser Romero sitting in a room making phone calls before stumbling onto a coincidence that reveals the culprits of the robbery. Quite a bit of the story feels made up on the fly, with the characters of Bergdorf and Foster becoming more important to the film than the title character and top billed actors.

That said, the story isn’t a total disaster. The heist itself is quite fun and has some imaginative scenes. The use of glowing paint and some split screen effects is some creative film making. It’s just a shame the long first act is a series of scenes used to set up coincidences that will play out in the third act. Many of these scenes feel like they were thought up to film with the supporting cast to allow the Rat Pack to go tear up Vegas.

The Rat Pack themselves are remembered for being exceptionally cool. The saying is that you could watch spend an hour watching them read the phone book because they were so naturally entertaining. This isn’t wrong, their scenes are the highlight and there are some nice musical numbers to break up the endless dialogue. It is jarring to see how much the 1960 definition of ‘cool’ includes some real asshole behaviour by today’s standards. Sinatra spends much of his screen time talking down to women, slapping their asses and then hitting on them again. It’s similar to looking back at the Connery era Bond films – it’s straight up abuse. They may have been considered the height of masculinity in their day, but they’re dickheads.

What the Remake Kept the Same

Well, the title is the same. And with it the main character. George Clooney plays Danny Ocean this time around, and he’s still a cool ladies man who leads a team of 11 criminals on a massive heist. The character differs in the details that we’ll look at next section, along with the other characters who get name and personality make-overs. Danny has got an estranged ex-wife in both version, however in the original it’s little more than a footnote.

The heist takes place in Las Vegas as before, and the target is a number of high price casinos although it’s three rather than five. Having members of the team already working in the casino or posing as workers is still part of the play, as is cutting the power to the whole block via demolitions.

There is one specific visual throwback to the original’s most note-worthy cinematic moment. When the modern Danny’s gang successfully complete their heist they all leave the rendezvous the tracking camera shot replicates the original gang leaving the funeral home after losing their money.

This is also a very cool film. It’s packed with cool actors, they have cool costumes, they speak cool dialogue. Being cool is the calling card of both films.

Director Steven Soderbergh was at the peak of his career when he got behind this project, one of the more mainstream films he made during the time. Whilst the skeletal structure of the script remains intact everything making up the muscle and the skin is different if you follow a poor metaphor. The biggest and most striking difference is that in the remake the gang do get to keep the money at the end, and none of them die. This gives the film a much more upbeat, feel good ending.

Danny is the same character on paper, but the fleshed out role of ex-wife Tess (Julia Roberts) gives him extra motivation. The scheme involves winning her back from the casino owner Terry Benedict (Andy Garcia), so Danny comes across more like a rascal than a scoundrel. Benedict is also a remake original, filling in the role of an antagonist, something the original didn’t have until the final act. It gives the heist a bit more personality and a face to oppose. Gone is the military backstory to link all the characters. Danny knows a couple of the schemers and recruits a couple of newbies as well. 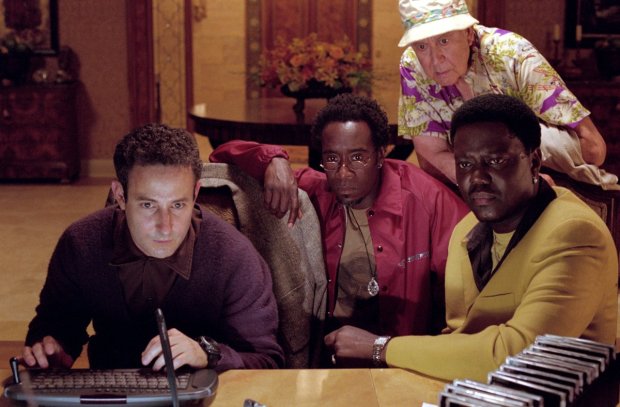 Then there’s the gang. Ocean’s right hand man becomes the perpetually eating, dryly sarcastic ‘Rusty’ Ryan (Brad Pitt) who mostly exists for Clooney to bounce dialogue off. Linus (Matt Damon) is a young pickpocket being mentored by Danny and Rusty, Reuben (Elliot Gould) is an old school Vegas figure who bankrolls the project, Basher Tarr (Don Cheadle) is a limey speaking demolitions expert and comic relief and Saul Bloom (Carl Reiner) is a retired con-man who plays different characters to work the job. Filling out the secondary roles are the constantly bickering Mormon Twins who work as drivers and undercover men (Scott Caan and Casey Affleck), nervous and neurotic technology expert Livingstone (Eddie Jemison), acrobatic ‘grease man’ The Amazing Yen (Shaobo Qin) and inside man Frank Cattan (Bernie Mac). The cast and characters are substantially more diverse and more distinctive, each having their own recognisable traits. You’d be pressed to name more than a couple of the original cast, but this one can be individually picked out by their silhouettes. 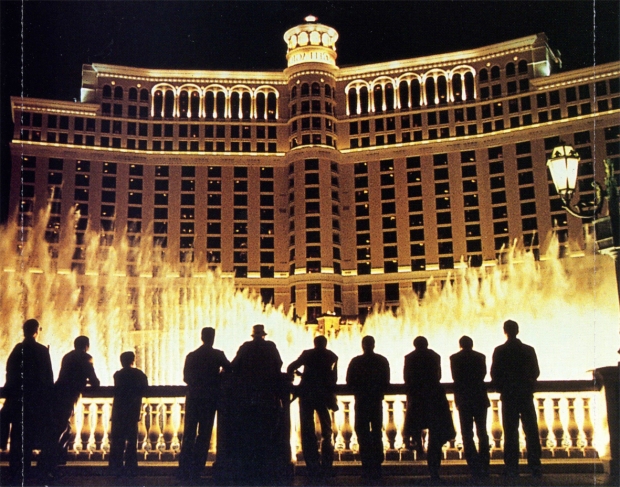 It’s a much more complicated job this time around. The original was heavily bookmarked with the backstories needed to unravel everything in the third act. This film is much more streamlined. This could come back to the attitude of the original cast, the reports that they would disappear of the casinos at the first chance they got. This massive new A-List ensemble put together for the remake reportedly took hefty pay cuts so the studio could afford to bring them all on board, suggesting that they had a lot of faith in the project and they had a lot of fun making it, so they’re all there and giving their all for every scene. Most of the team go undercover as a different person at least once, pretending to be workers or whatnot, there are remote control cars, electro-magnetic pulses, SWAT team disguises, working replicas of the casino vaults and more, everything working together to pull off an incredibly elaborate heist that holds plenty of twists to keep the viewer guessing.

In all honesty the critically slammed and largely ignored sequel, Ocean’s 12, is more of a spiritual remake of the 1960 version. The cast seem to have signed on to take a holiday and get wasted together, it’s more about the locations and making the cast looks cool and there’s a reliance on supporting cast members and ridiculous twists instead of telling a story.

Which One Should You Watch? 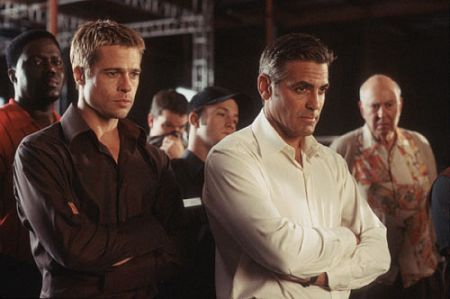 The Rat Pack certainly have their fans and with good reason. They have plenty of great films and performances that are worth checking out, but Ocean’s 11 isn’t usually counted among them. It’s a popcorn film with little effort put into it. Oceans Eleven, however, is a popcorn film with heaps of effort put into it without seeming to work very hard at all. It remains one of the slickest and coolest heist films available and although the sequels were very much a miss and a near miss the original holds up. If you haven’t seen it, it’s worth the time. If you have, it’s worth a rewatch. Either way you can skip the original.

Got a suggestion for an original and remake to compare? Want to vote for the version you liked best? Do so below!

Next I’ll be looking at a classic about philosophy and religion remade using the gibbering madness of Nic Cage! And no…it’s not ‘The Wicker Man’. It’s the other one.