This is a film which sadly far too many people know solely based on reputation and parody. All they know is that it is an underdog boxing movie starring a musclehead who talks funny. But should they take the time and actually watch Rocky they will realize why this beautiful movie has earned its place in film history. Before all the satire and sequels, there was 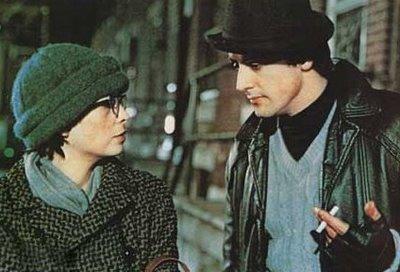 Rocky, the movie Sylvester Stallone sacrificed everything for, to tell the emotional story of a man making the most of an impossible opportunity.

The character of Rocky Balboa, portrayed by Stallone who received an Oscar nomination for his work, is a struggling boxer who fails in every attempt to win the romantic interest of the shy pet shop clerk Adrian. This relationship is the foundation which the movie is built on as it feels so raw and real.Neither Stallone or Talia Shire (who also earned a nomination for the Oscars for this flick) has stunning movie star good looks, nor is either character a stunning and dynamic personality, they are two vulnerable and believable people who find themselves thrust almost reluctantly into the spotlight. Because while their story is unfolding in the slums of Philadelphia, the heavyweight champion Apollo Creed has cooked up an idea where he would give an unknown fighter a shot at the title. Based solely on the idea that Rocky’s title “The Italian Stallion” sounds catchy it earns him the chance of a lifetime.

Sylvester Stallone’s passion to make this film has become the stuff of Hollywood legend, as the actor put everything on the line for this picture. He even turned down the initial offer for his screenplay because the producers wanted a traditional leading man for the role of Balboa and Stallone knew it his heart that he was the only one who could play the hapless boxer. But it is not just the brilliant script which Stallone penned which makes this movie a classic, often overlooked for his contributions to Rocky is director John Avildsen, who gives the picture a very realistic feel. Avildsen pulls off the great balancing act of creating the gritty world inhabited by Rocky, Mickey, and Paulie as well as the world of wealth which Apollo Creed calls home in which Rocky always looks out of place.

Avildsen also never lost sight that it was the human aspect of the picture which was its strength rather than the boxing action. Under his guidance each actor creates a memorable character from; Burgess Meredith as the cranky Mickey to Carl Weathers’ flashy Apollo Creed.

And though many know how the climactic boxing match ends, it does not take away from the pure adrenaline rush of the battle. Two warriors trading blows; one looking to take full advantage of an opportunity he should have never had and the other a champion stunned that the man he was supposed to squash is actually proving to be a challenge. By the end of the match the viewer is emotionally drained as they watch a wounded and beaten Rocky cry out for Adrian. Every memorable character interaction and training scene pays off in this match which sucks you in and refuses to let you go.