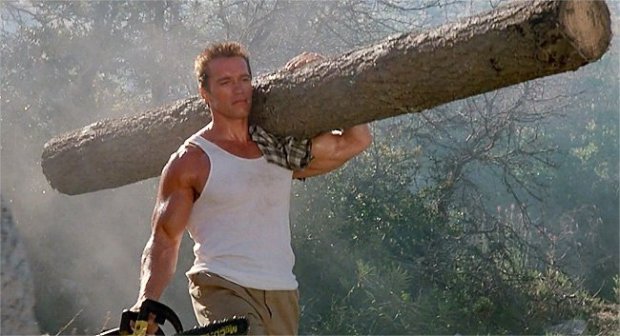 “Hey Jenny! I think I finally found a toothpick I can use!”

Long before Liam Neeson and Taken, there was Arnold Schwarzenegger and his own special set of skills in Commando.

There’s a story in Hollywood that when Arnold Schwarzenegger was first starting out in the movie industry, he told his agent he was going to be the biggest movie star in the world.  Not surprisingly, his agent scoffed at the idea.  Here was an immigrant from Austria who possessed an incredibly think accent, so thick in fact that in his first movie Hercules in New York, all of Schwarzenegger’s lines were dubbed over.  Yes Arnold was famous in the bodybuilding world having won Mr. Universe several times and the success of Pumping Iron was due in large part to the Terminator-to-be, but he didn’t possess the classic movie-star good looks, didn’t come from money, and didn’t exactly have the ear of Francis Ford Coppola or Woody Allen.

However, if you’ve followed the career of AH-NULD at all, you probably know that the best way to motivate him is to tell him he can’t do something.  Before long his iconic role in 1982’s Conan the Barbarian would propel him into the limelight.  This was followed up by Conan the Destroyer two years later and a little indie flick helmed by a young James Cameron called The Terminator.  Despite his early successes however, at this stage in his career I don’t think you could call Schwarzenegger a legit action star.  All three films were genre pictures, not action films like Death Wish and Rambo.

In the years to come action hits like Predator, True Lies, Red Heat, and Total Recall would make the name Arnold Schwarzenegger synonymous with action pictures.  However, it was director Mark. L. Lester’s modestly budgeted ($10 million) testosterone fest that really got the dumbbell rolling for Arnie.  It was his first all-out action movie, a film that held nothing back and I question whether or not this movie would be able to be made today.

So what makes Commando arguably the best action film of all-time?  Well as El Guapo might say in The Three Amigos, a “plethora” of things.

Now you could probably file this statement under “obvious statements are obvious” however, everyone reading this knows that there are plenty of action films out there where the action is either non-existent or poor in the extreme.  (Speed 2 anyone?)  You can’t say that about Commando.  You want someone escaping from a plane taking off?  Done.   Gunfights in a mall?  We got it.  Taking out a Green Beret in a hotel room?  Commando has you covered.  AH-NULD attacking the main villain’s compound BY HIMSELF with a rocket launcher?  Your wish is Lester’s command.  Throw in dropping a guy off a cliff and impaling another dude with a steam pipe, and your quota of appropriate on-screen action is more than covered.

One thing you can say about screenwriter Steven E. de Souza, the dude knows action films.  In addition to Commando,  he penned the first two Die Hard films, 48 Hours,  The Running Man, and Street Fighter.  So just in case you’re keeping score at home, that means his scripts were good enough to entice Schwarzenegger, Eddie Murphy, Bruce Willis, and Jean-Claude Van Damme.  While the plot is simple–retired special forces guy has his daughter kidnapped and wages a one man war to get her back–it’s executed perfectly.  It’s completely unpretentious, it’s not trying to be anything more than it is, which is just a dynamic action film.  Many films, especially nowadays, don’t have a clear identity.  Commando has a fully formed identity.  Obviously a key element to any script is the dialogue.  And speaking of dialogue….

The one-liners.  Holy shit the one-liners in this movie!  In the hands of another actor they may have come off cheesy (to be fair they kind of are) but with Arnold at the helm, every damn one-liner lands with the grace of a Bald Eagle.  How can you go wrong with lines like:

“Remember Sully remember when I promised to kill you last?  I lied.” (Arnie drops Sully off a cliff.)

“Let off some steam Bennett.”  (After impaling the main henchman of the film with a steam pipe.)

“I eat Green Berets for breakfast and I’m very hungry!”  (Just before taking a dude out in a hotel room.)

“Don’t disturb my friend, he’s dead tired.”  (Right after breaking a bad guy’s neck on an airplane and making it look like he’s just sleeping.)

“I’ll be back.”  Incidentally that last was only the second time Schwarzenegger said it in a film.  These words would become his signature catch-phrase in the years to come. 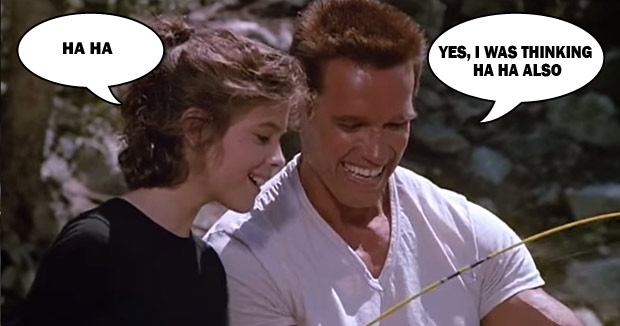 Matrix and Jenny reacting to the idea of calling in backup.

I should clarify.  When I’m talking about the villains in Commando, I’m not referring Dan Hedaya, who plays the main villain Arius, a South American former dictator who wants Arnold’s character John Matrix to kill a politician so Arius can lead a military coup.  Hedaya is straight up awful in this role.  He’s completely miscast, sports an awful South American accent, and is as about as believable as a former dictator as Harry Knowles would be as the head of the Feminist Majority Foundation.  Thankfully, he’s not in it much.

No I’m speaking of Sully (David Patrick Kelly), Cooke (Bill Duke), and Bennett (Vernon Wells).  Sully was the requisite funny guy, which I’m sure Col. John Matrix (Schwarzenegger) would agree with.  After all he did promise that he’d kill Sully last because he was funny, one promise which he unfortunately didn’t keep:

You have to give Sully credit though thinking he could even challenge the Austrian Oak.  Either he was very brave or very stupid. Probably both.  Cooke on the other hand, played by the peerless Bill Duke, was fearless going up against John Matrix.  When he says, “This Green Beret is going to kick your ass!” he means it.  Sadly Matrix was very hungry that day:

Lastly of course was Bennett.  If you wanted someone to play a bad guy in the 1980s you called Vernon Wells.  This guy’s list of villainy includes classics like The Road Warrior, Weird Science, and Innerspace.  From the creepy smile, to the wild eyes, the guy just exudes evil.  His Bennett is a villain who possesses a real personal stake in taking down Matrix.  John is his former mentor and when you confront your former mentor you….apparently wear a mesh shirt you got at the Blue Oyster from the Police Academy movies:

This ranks right up there with the coolest Arnie kills of all time.

Certain action movies are so by-the-numbers and pat that you could plug-and-play any actor in the main role and it wouldn’t make a difference.  That’s not the case with Commando.  I can’t think of anyone else playing this role except AH-NULD.  He owns this part from start to finish, and somehow manages to maintain a perpetual sheen of sweat through the entire film.  I mean his character’s name alone.  John Matrix??  Are you kidding me??  How fucking cool is that name?!!!  He’s a one man wrecking crew.  Forget about exaggeration.  Matrix’s attack on Arius’ compound at the end of the film is some Paul Bunyan, tall-tale, next level shit:

There’s more slow motion in this scene than even Zack Snyder can handle.  Seriously these guys die quicker at Matrix’s hand than Sean Bean in an epic fantasy role.  If John Matrix was a real person and we sent him after ISIS, they’d be WASWAS.

Commando is a testosterone-filled, non-stop, bloody, relentless, rocket launcher blast to the eye-sockets.  Although some say it’s a product of its time, I call it a timeless action classic, that still holds up 32 years later.