Plot:  Divorced and grieving mother Mildred Pierce (Frances McDormand) remains despondent seven months after the rape and murder of her only daughter.  In response to the Ebbing police department’s ineptitude, Mildred decides to rent out three billboards targeting the Ebbing police department, in particular Sheriff Bill Willoughby (Woody Harrelson).  Her actions infuriate a large portion of the town including police officer Jason Dixon (Sam Rockwell), an unrepentant racist.  But will Mildred’s actions produce results or ultimately end in more bitterness and frustration?

Review:  This is the time of year where, inevitably, audiences are exposed to top tier films.  It’s not surprising considering that award season is just around the corner and most studios are making an Oscar push hoping to garner golden statues.  Indeed just within the last month I’ve seen two with The Last Jedi and Mudbound.

Three Billboards is another.

Backed by powerful performances and masterful direction from Martin McDonagh, Three Billboards is one of the best films of 2017.  A taut and compelling film about loss, regret, and injustice, Three Billboards comes across as equal parts drama, dark comedy, and mystery thriller.  Once again McDonagh proves to be an adept screenwriter.  Like his previous films Seven Psychopaths and In Bruges, Three Billboards sports biting and realistic dialogue.  It’s also a complex story that tackles dark subject matter but also provides moments of levity, even if the humor is decidedly of the black variety.

Inspired by an actual event McDonagh witnessed in the South, the director paints a decidedly vivid picture of rural middle America.  McDonagh captures that close-knit almost tribal like quality of a small town, where certain things are expected and brazen actions like Mildred’s are frowned upon.  The narrative also touches on the national racial divide as Mildred remarks that the police department, particularly Rockwell’s Dixon, are more concerned with torturing black teens than finding actual criminals. 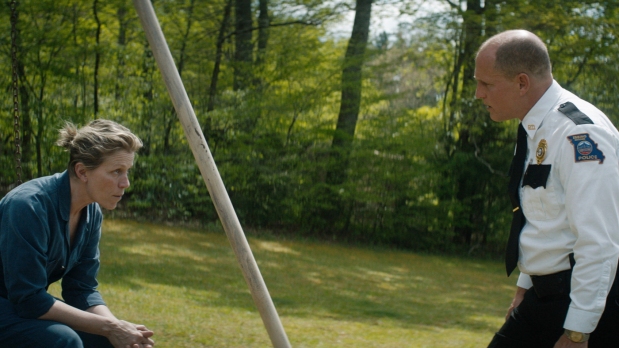 With Three Billboards, McDonagh brings together a veritable who’s who of old and young talent.  Everyone contributes in a meaningful way, whether it’s Mildred’s son Robbie (Lucas Hedges) who’s ambivalent about his Mom’s actions while facing the repercussions at school.  John Hawkes (Deadwood) also shines, albeit briefly, as Mildred’s ex-husband Charlie.  Their verbal repartee is priceless and despite his past, he somehow arouses empathy in the viewer.  Peter Dinklage (Game of Thrones) also impresses in small but ultimately crucial role as James, a would-be love interest of Mildred’s, who sees a kindred spirit in the grieving mother.  James is endearing, sweet, and empathetic.  It’s about as far removed from Tyrion Lannister’s personality as you can get.  Even Samara Weaving’s role as Charlie’s ditzy girlfriend Penelope adds a decent some welcome humor.

While the entire ensemble is excellent in Three Billboards, Woody Harrelson, Sam Rockwell, and Frances McDormand are on another level all together.  Each gives the performance of a lifetime especially the last two.

Although Mildred paints Willoughby as inept, Harrelson portrays him as anything but that.  He’s a seasoned lawman that’s old enough to know that sometimes leads and evidence run dry when it comes to certain crimes.  While Willoughby tries to impress this upon Mildred early on in the film in a brilliant scene between McDormand and Harrelson, it’s not an acceptable answer for a mother grieving over the rape and murder of her daughter.  Harrelson makes Willoughby inherently likeable as McDonagh plays up the family-man side of his life.  Furthermore, we empathize with Willoughby because he’s also dying of pancreatic cancer.  Yet he’s never bitter and chooses to enjoy each day fully.  He’s a man who sees the good in everyone, even his fool of an employee Dixon.

Speaking of Dixon, this is the performance of Sam Rockwell’s career.  A severely underrated actor who’s delivered great past performances in films like The Green Mile, Choke, and Confessions of Dangerous Mind, his performance as the idiotic and unrepentant racist cop Jason Dixon is sure to garner him an Oscar nomination and possibly the statue itself.  I found myself repulsed by his blatant racism and laughing at his ignorant comments and actions.  I couldn’t take my eyes off him.  Moreover, his character evolves in such a way that by the end of the movie you empathize, even feel sorry for him.  The fact that Rockwell accomplishes this, testifies to his talent and dedication to the role.

As great as Rockwell is, Frances McDormand owns this role.  She captivates so completely as Mildred that I can’t picture anyone else in the part.  In a storied career that includes stellar performances in films like Mississippi Burning, North Country, and Fargo (for which she won the Oscar) this is the pinnacle.  She’s never been better.  Like Rockwell she’s a shoe-in for an Oscar nomination and there’s a good chance she’ll walk away with statue number two.

Timely, relevant, funny, and always compelling, Three Billboards Outside Ebbing, Missouri succeeds on every level.  It’s a prime example of how great a movie can be when talent in every film-making facet intersects.  It’s a masterful work. 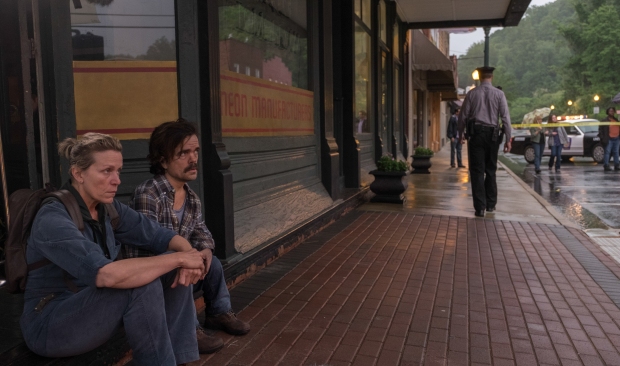