During the Golden Age of Hollywood, most stars were placed on a pedestal. They were this glamorous and famed overclass the mortals who watched them on screen could only aspire to be like. But there was one star who audiences formed a bond with, an actor who had a charm and affability they could connect with. That man was James Stewart, or as moviegoers knew him as, Jimmy Stewart. Whether he was paling around with a giant rabbit or suspecting his neighbor of murder, audiences could not get enough of Stewart and he has become one of the greatest icons in film history. In honor of Jimmy Stewart and his place in movie history here is a few of his greatest films.

Harvey: The plot of this movie is so strange, that when you describe it to people they give you a look that says “you’re kidding me right?”. Perhaps if any other actor would have been the lead it would have been relegated to silly B movie status, but Stewart turns Harvey into an utterly charming and endearing masterpiece. Stewart plays Elwood P. Dowd, a perfectly amiable man who sees everyone he encounters as a potential friend. Dowd is rarely without the company of his closest friend, Harvey, who happens to be a 6 foot 3.5 inch tall rabbit whom only he can see. His family members and psychiatrist hilariously scramble around trying to get Dowd the help they feel he needs. But Dowd is oblivious to their machinations as he and his rabbit friend go through life living by the idea that after years of being very smart it was time to be very pleasant. Where as many other actors would have played this role for laughs to prove they were in on the joke, Stewart instead plays it straight bringing a genuine earnestness to the role which people can not helped but be touched by. 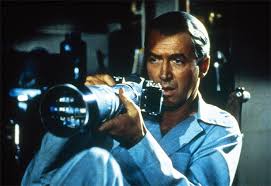 Rear Window: Arguably Jimmy Stewart’s greatest collaboration with the Master of Suspense, Alfred Hitchcock. Confined to his apartment with an injury, the adventurous photographer L.B. Jefferies is forced to take it slow and find new ways to keep himself entertained. With seemingly nothing else better to do, he begins to use his camera lens to observe those who live in the building directly outside his window. This act of voyeurism lands him into something he was not expecting one night, when the ill wife of the aloof salesman he has been watching cries out for help before she is silenced.  Jefferies watches as the salesman begins to act more and more suspicious and all signs point to the fact that he murdered his wife but he has not evidence to support his claims. He eventually enlists the help of his girlfriend Lisa Fremont, played to absolute perfection by Grace Kelly, to help him prove he has a murderer as a neighbor. Stewart’s helplessness throughout the movie is what drives the tension in Rear Window. The actor proves to be perfectly charismatic to lead a film while spending most of it sitting in one spot, yet likable enough that our stomach is twisted into knots dreading the danger he is in. 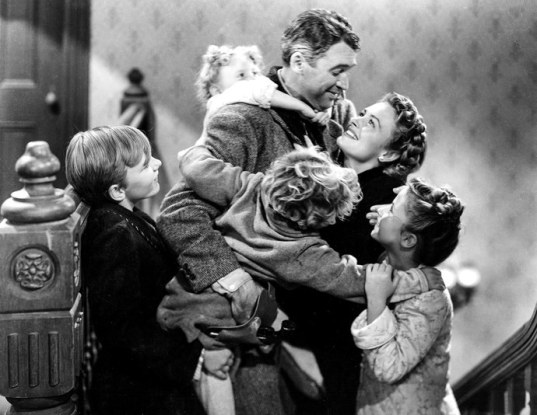 It’s a Wonderful Life: Considered by many nowadays to be the ultimate Christmas movie, it was a flop upon its release. Thankfully it became a staple of holiday television and eventually evolved into a classic of the season. Directed by the legendary Frank Capra, this movie is about George Bailey, a man who has had nothing in his life go the way he planned. His goal to travel the world comes to an abrupt end, when he is forced to take over the family business to protect his hometown from the ruthless Mr. Potter. Through the eyes of his guardian angel Clarence we see George’s life up to the point he hits his lowest point and contemplates leaping to his doom. Through divine intervention, George Bailey is allowed to see his hometown as well as everyone he knows, fall into despair in a world where he never existed. It’s a Wonderful Life, shows that none of us truly understand the impact we have made on the lives of others, and that life truly is a precious thing regardless of the course it takes. 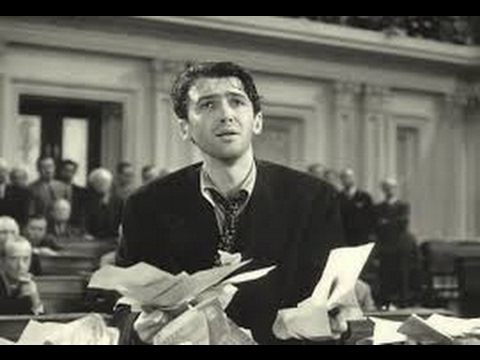 Mr. Smith Goes to Washington: When you need someone to fight against “the man” who better than the ultimate everyman. When a senator dies and the governor has to pick a replacement, the state’s political boss convinces him to simply nominate Jefferson Smith who would be the ideal good-natured naïve patsy who could be easily manipulated. Once in Washington he finds himself preyed upon by both the press and Senator Joseph Paine (played by the great Claude Raines). Smith is duped into proposing a bill backed by the corrupt elite and is drawn into their machinations. But with the support of his constituents he embarks on a follhardy crusade to expose the corruption among his colleagues and fight for the ideals of America, despite the fact that this is a losing fight. The film has become recognized internationally for its pie-in-the-sky look at American determination, the film was banned in all of the Axis nations as well as the Soviet Union during World War II. In fact when the Nazis overtook Paris and banned American films, theaters screened this movie nonstop in protest. It has more than earned the spot it currently holds on the National Film Registry.

Vertigo: The other film which gets the argument of the greatest picture Stewart did with Hitchcock. Forced to retire from the San Francisco police due to suffering from vertigo, Scottie Ferguson finds himself drawn into a mystery involving the wife of a friend. The two of them grow close as he unravels her mystery, tied to the woman in an old painting, but his condition prevents him from stopping her from committing suicide. Of course being a Hitchcock thriller things are not as they seem and there are twists and turns galore. When it was originally released, audiences were divided in their opinions on Vertigo, but it has since become recognized as well of the best made and expertly crafted films of all time.

The Philadelphia Story: Jimmy Stewart shares the screen with fellow movie legends, Cary Grant and Katharine Hepburn in this beloved romantic comedy. Hepburn plays Tracy Lord, a wealthy socialite who is set to be remarried and Stewart plays Mike Connor, a reporter looking to get the scoop by covering the event. Luckily Lord’s first husband Dexter Haven (played by Cary Grant) happens to have done some work for the magazine Mike works for, and pulls the necessary strings to get him in.  The bride-to-be finds herself charmed by the likable reporter, and finds herself in a love square between; Dexter, Mike, and the man she is set to marry. The Philadelphia Story is a tightly scripted comedy that fires on all cylinders, thanks to the gifted cast it has. Despite not being the first choice for the role, Jimmy Stewart surprisingly picked up an Oscar for his performance (Stewart himself said he did not even plan on attending the ceremony).

The Man Who Shot Liberty Valance: Despite being often cast in comedies and dramas, Jimmy Stewart was more than capable of holding his own in a rough and tumble Western. The best of which, he starred in with the Duke himself, John Wayne in the Man Who Shot Liberty Valance, with an incredible supporting cast which included; Lee Marvin, Vera Miles, John Carradine, Edmond  O’Brien, and Lee Van Cleef. Venturing out west to start a new life, idealistic young attorney, Ranse Stoddard is attacked and left for dead by Liberty Valance. He is taken in by the grizzled rancher Tom Doniphon who gives the young man guidance as he takes up residence in the town of Shinbone. As an act of defiance against Liberty Valance, Stoddard brings the ideals of justice and education to the town, which naturally does not go over well with the outlaw. An inevitable showdown occurs and what follows, becomes the stuff of Wild West legend. The Man Who Shot Liberty Valance was directed by the great John Ford, who chose to shoot the film in black and white as opposed to color, due to its darker subject matter. He firmly believed the final showdown could only work in monochromatic visuals. Decades before Unforgiven, this picture took a hard look at the role myths and legends played in shaping the Old West. 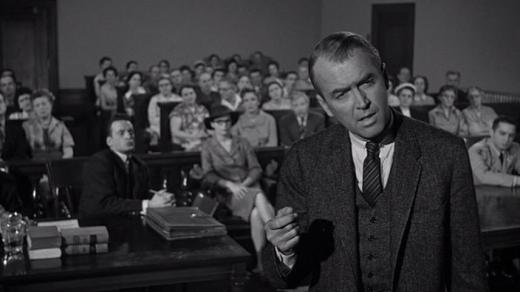 Anatomy of a Murder: Inspired by a true life murder case in 1952, Jimmy Stewart plays Paul Biegler, a former district attorney who is enjoying his retirement, until the wife of a soldier accused of murder asks for his help. His new client, Lt. Manion, does not remember carrying out the crime but claims that the victim raped his wife, so if he did commit the crime he is not particularly sorry. Returning to the courtroom Biegler once again gets to display his sharp legal mind, despite having the deck stacked against him. Naturally the case is full of twists and unexpected surprises as Biegler fights to get his client off. Anatomy of a Murder shocked audiences upon its release due to its gritty nature, and was even banned in the city of Chicago. It has since become a classic among those in legal occupations because of its realistic portrayal of life as a criminal attorney.

One thought on “Spotlight on Jimmy Stewart”