A while ago I wrote about the worst villains seen in comic book films (which can be read HERE). And while many people enjoyed it, the bad guys have not always been the worst part of a superhero flick. Sometimes the superheroes themselves are the ones who drag their own movies down. In the spirit of fairness I am now going to look at the other side of the coin and the worst superheroes from comic book films.

Superman (Man of Steel, Batman vs Superman): When Zack Snyder was charged with rebooting the Last Son of Krypton, he stripped away; the charm, the selflessness, the desire to do what is right, the heroism, and really all of the things that made Superman who he is. Clad in a muted colored suit, we see a Superman who would be more content with brooding as a city crumbled around him than helping the citizens Metropolis. In Man of Steel we see him have no problem with tearing apart TWO cities while battling with bad guys. No attempts were made to help civilians caught in the crossfire or even take the fighting away from populated areas. At one point after he thinks he has defeated Zod, the Man of Steel takes this as his opportunity to make out with Lois Lane…..on top of the rubble of the city. In the sequel Batman vs. Superman, we witness him outright kill a warlord who has Lois Lane hostage within the opening minutes of the flick. There is a montage of Supes helping people in various dangerous circumstances, but it is undermined by the fact that the entire his facial expression reads that he would rather be doing something else. While Justice League made an effort to introduce a Superman fans are familiar with, the constant references to him as a beacon of hope did not jive with previous films. For those who actually want to see Superman as a jerk, go read the Mark Waid comic Irredeemable, as it is much better than Man of Steel or BvS.

Captain America (Captain America): Not Chris Evans here, but rather Matt Salinger from the abysmal 1991 flick Captain America (my take on it from many years ago can be read HERE). The filmmakers behind this rightfully forgotten flick, decided to eschew any of the noble and heroic qualities the Star Spangled Avenger is known for. Rather the protagonist we got was a man in a silly costume (complete with rubber ears) who when confronted with even the slightest hint of danger would chicken out and run away. Even when a kindly, middle-aged, portly reporter is giving him a ride back to civilization, Cap steals the man’s truck and runs away because he suspected this guy was a spy. When pursued by the Red Skull’s Eurotrash teen daughter, the Sentinel of Liberty….runs away and hides. Even during the film’s climax, Cap runs around hiding behind his shield while the president, who is supposedly the Red Skull’s “hostage” breaks himself free and runs around kicking ass and taking names.

Robin (Batman Forever, Batman & Robin): Granted neither actor who played the Dark Knight in these flicks did a spectacular job either, but I hold a particular hatred for the way Robin is portrayed in these movies. For starters, Dick Grayson is supposed to be a young acrobat, hence why he needs a guardian to him in when he is orphaned. Chris O’Donnell is easily in his mid-to late twenties when he debuted in the role for Batman Forever. But this seeming maturity does not stop him from acting like a whiney 10 year old for two movies. In Batman Forever he whines that Batman won’t let him try to fight a highly dangerous villain. He is most insufferable in Batman & Robin where he spends two hours decrying the fact that Batman does not trust him after an incident where he broke Batman’s trust. Granted nobody comes out of that movie not looking terrible, but Robin had it especially bad.

Storm (X-Men, X2, X-Men: the Last Stand): In the comics, Storm is a powerful and regal superhero who commands the respect of her fellow mutants in the X-Men. In the movies she could not be further from the source material. Despite being played by the talented Halle Berry (sadly will not be the last time she is on this list) Storm does little to distinguish herself in this ensemble cast. This is until the much maligned third film when Storm is thrust into the center of everything right alongside Hugh Jackman’s Wolverine. This clashed with the subdued style with which Storm was portrayed in the previous flicks, as she was now more militant with no explanation. As much as she has been made the scapegoat for Ororo Munroe’s poor cinematic outings, Halle Berry does not deserve nearly as much of the blame as she has been given as she spent two of the three movies (and a bit role in Days of Future Past) as more of a background character, who was not built up to take the lead as she ultimately did. This proved to be a great disservice on the part of the filmmakers concerning their take on one of the X-Men’s most famous characters.

Steel (Steel): In the 90’s Orlando Magic/LA Lakers center Shaquille O’Neal was one of the biggest stars around (literally and figuratively) and he made no secret of his love of Superman. Somewhere at Warner Bros. some fool saw dollar signs in this. While the big man who’s only acting credit was being a genie did not play the Man of Steel, but he was given the part of someone Superman related. Steel had debuted in comics during the aftermath of the “Death of Superman” and instantly became a fan favorite. Capitalizing on this success Shaq was cast to play Steel in the characters first (and only) big screen appearance. If the poor acting and production values do not make you giggle, the sight on an 8 foot tall man covered in clunky armor surely will.

Catwoman (Catwoman): Fans have been clamoring for a solo Catwoman movie for a while. The suits in Hollywood heard our demands and in turn slapped some crap together which barely resembled Gotham’s most famous thief. Fans expecting the street smart antihero they knew, were hurt to see Catwoman was a literal woman who acted like a cat due to some mystical something or other. Fresh off a lauded performance in Monster’s Ball, Halle Berry was given the unenviable task of trying to get viewers to buy into this vision of Catwoman. Needless to say she failed. Instead of Selina Kyle we are given a new character named Patience Phillips, who literally acts like a cat. She awkwardly mews, laps up milk, and plays basketball….like a cat I guess. In all honesty it is not very comfortable watching an actress who proved the depth of her talent so shortly before Catwoman came out reduced to this. To her credit win the actress was awarded the Razzie for the movie’s failure she was a good sport and accepted the award in person. 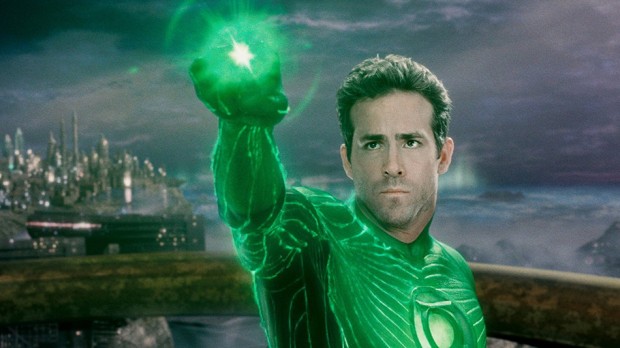 Green Lantern (Green Lantern): Luckily Ryan Reynolds had Deadpool or this would be the superhero he would forever be tied to. For years people clamored for Green Lantern to be brought to the big screen, but the micromanaged product we ultimately got made many people regret that decision. Props to Ryan Reynolds for trying his best, but his gift as an actor is comedy which weighed him down in this role. In his alter ego, Hal Jordan, he causes a number of his colleagues at Ferris Air to be laid off which is not the way to get audiences to root for your protagonist, especially while the effects of the Great Recession were still being felt. When he gets the ring, Jordan spends a majority of his time in Green Lantern Boot Camp listening to nonstop expository dialogue. When he is finally allowed to throw on his animated suit and be a superhero he does so against a whopping TWO supervillains. Unfortunately neither Parallax nor Hector Hammond comes off as particularly threatening much less memorable, and like they say; the villain defines the hero.

The Invisible Woman (Fantastic  Four, Fantastic Four: Rise of the Silver Surfer): True little went well with this adaptation of Marvel’s First Family, but one of the biggest problems was how out of place Jessica Alba looked as Sue Storm. Far from the kick ass maternal figure of the team, Alba was simply thrown in for eye candy (with unnatural creepy blue contact lenses to boot). Whereas her three co-stars actually turn in fun performances and are enjoyable to watch despite the poor quality of the movie, Alba demonstrates the acting talents of a door knob. I defy you not to cringe when she recites the line “No, lets” when Doctor Doom says “Let’s not fight”.  As much as I hate to give it a pass, I can not rate Kate Mara of the 2015 reboot, as I believe the chaos behind the scenes prevented her from actually giving a solid effort. Throughout Fantastic Four we see that she was unable to keep a decent wig much less consistently delve into the part.

← The Poltergeist Curse
Update: Movies that Want to Be the Next MCU →