If you’re a regular reader you’d know that I spent last week marathoning the five previous Predator movies, and that I’m a massive fanboy of the original since childhood. So when we learnt that Shane Black, the awesome director of Kiss Kiss, Bang Bang and The Nice Guys, was returning to the franchise after playing Hawkins in the original we were excited.

And tonight we saw it. What did we think?

Plot: A Predator ship crashes into the Mexican jungle and is discovered by McKenna, a mercenary sniper. He gets taken in by Will Traeger, a government agent who controls and investigates encounters with Predators, but not McKenna ships the technology back to his family. When Predators arrive looking for what they’ve lost a killing spree ensues.

Review: This movie has two distinct parts to it: fan service and stupid. Because we want to end on a positive note, we’re going to start with the stupid.

The story is needlessly convoluted, with multiple factions spread out all over the place and only coming together for a proper Predator hunt in the final act. They spend a long chunk of the film struggling to set everything up. First McKenna (Holbrock) has to find the crashed ship, work out some of the new technology, lose his squad, go on the run long enough to post a package home, get captured…meanwhile we have a biologist Bracket (Munn) who gets recruited and introduced to a secret organisation who also have arrested McKenna who meets a group of mentally ill former rangers…meanwhile McKenna’s autistic son inadvertently gets the package and starts decoding the Predator technology…and this is all before a single Predator goes on the rampage.

It feels like a script that has been through multiple rewrites, each adding more random coincidences to patch up plot holes.

We’re also pretty tired of the Magic Autistic Kid trope who can take one look at complex mathematics that have stumped geniuses for generations and solve them. We like the representation in genre films, and we’re happy to accept the stereotype because it’s familiar to audiences, but they really take it to the point of stupidity here. Now this is going to get into the SPOILER territory, but Munn drops an out-of-context line about a theory saying autism actually being the next stage of evolution. It’s a weird enough moment but later the Super-Predator thing turns out to be targeting the kid because, yes, being autistic means that he’s a more highly evolved being. That’s stupid.

Then there’s the dogs. The Predator’s are established as a race of hunters, so it’s a clever idea that they’d use some kind of hound in their pursuits. We saw that in Predators, and they used it to good effect. What doesn’t make sense is that these ones are some kind of Predator-dog mix, complete with little dreadlocks who act like tame puppies who play fetch after getting shot in the head. That was all pretty stupid as well. They’d mentioned near the start that the captured Predator had some human DNA in it’s blood, so we thought that what we’d seen were human-alien hybrids, these were dog-alien hybrids and the Super-Predator was the first pure-blood Predator we’d seen. But no.

Right, that’s the stupid. Let’s talk about the fan service.

We get plenty of tough guys running around in the jungle, evocative of the original, in addition to some sequences in a suburban setting to mix things up. We get a motley collection of cartoonish soldiers to get picked off one by one, and it’s a fun collection of actors (Key, Jane, Allen, Rhodes, Aguilera) in the roles. They’re fun to watch. The Predator designs are still awesome, and their new weapons are cool, with the tow line being particular creative in its use.

What was unexpectedly cool was the film picking up the dropped plot thread of a secret government agency introduced in Predator 2 and barely mentioned since. We even have Jake Busey playing the son of Gary Busey’s character from the earlier film, which was a fun nod. Dr. Bracket is brought into the story through this agency, and it’s here that they actually explore the motivation behind the Predator’s hunting expeditions. In addition to keeping spines as trophy’s, the Predator’s have been harvesting genetic material to further improve their own ability to hunt, and they’ve been coming to Earth more frequently because they see climate change as their last chance to get the best samples before the human race becomes extinct. 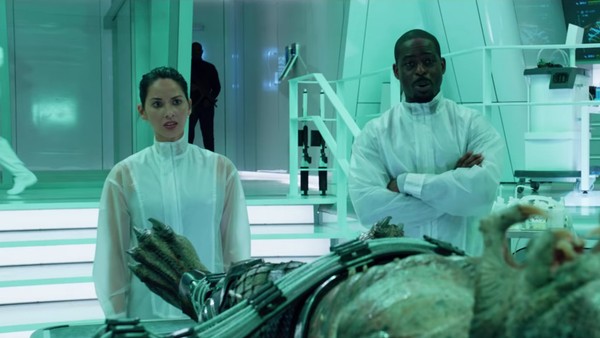 We like the way they pull together some of the plot holes and loose threads of the original films and builds on them, it’s just a shame that some of the other new elements dragged it down. They eventually build to the opening of a cargo pod left by a renegade Predator who wanted to help humans. We were hoping to see a Xenomorph or Adrian Brody pop out, but what we got was just kinda silly.

The blatant fan service of the movie gave us plenty of laughs throughout the film (excellent use of the ‘get to the chopper’ line), and the action and gore is one point. The Predator’s continue to be an awesome movie monster. We’d have liked the structure to be more based around an actual ‘hunt’, with the team getting picked off one by one, rather than some of the ridiculousness we got, but we’re just landing on the right side of ‘fun’ here.