Plot: Arthur Curry protects those at sea as the metahuman Aquaman. When his step-brother Orm rallies the undersea kingdoms against the surface world, Arthur is forced to act and potentially fulfil his destiny.

Review: Holy moly, this movie is straight up hectic. They jam so much into this film that it becomes ridiculous. It sure isn’t boring though. It still carries the lingering odour of the DCEU though, as in we somehow missed the first act.

We open with lighthouse keeper Thomas Curry (Morrison) discovering the wounded Atlantian princess Atlanna (Kidman) washed up on the rocks. They fall in love and have a child – Arthur. Eventually Atlanna is forced to return to the ocean, leaving Arthur with one foot in each world. We then pick up a year after the events of Justice League, although the film struggles with being a sequel and an origin story and jams in a bunch of flashbacks with Nuidis Vulko (Dafoe) training him to fight for…reasons?

Ok, never mind all that. Aquaman is a recognised hero even if the existance of Atlantis is a matter of public debate. He rescues a submarine crew from a gang of super-hi-tech pirates, fighting the father-son leadership team and refusing to save the life of the father leaving the son to swear revenge as Black Manta (Abdul-Mateen II). Then Princess Mera (Heard) turns up to recruit Arthur in taking the throne from Orm (Wilson) before he and Nereus (Lundgren) lead all the denizens of the deep against the human world, but they’re also in cahoots Black Manta to instigate the war and there’s a magical trident and Arthur doesn’t want to be king but the world will be destroyed and OH GOD STOP I’M GOING TO HAVE A SEIZURE. 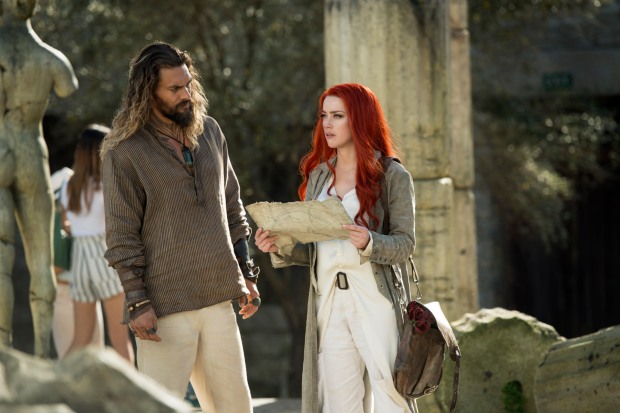 This movie leans heavily into big spectacle moments, recreating famous comic visuals and switching things up every few minutes. We literally go from a fight in Sicily to romantic drama on a boat to fighting thousands of Lovercraftian Deep Ones to finding a world of dinosaurs to battling a giant kraken kaiju thing voiced by Julie Andrews. All within about 10 minutes. It’s completely bananas, but at least if you don’t like one thing it’s not long before it all changes.

For some reason the DCEU also wants us to take on the entire Aquaman lore in the space of the first act. There’s something like five major factions under the water, each with their own leaders and visuals, lots of back story between all of them, the origin of Black Manta and his technology and a couple of conspiracies thrown in for good measure. It’s not dissimilar to Game of Thrones if that show was garish and insane.

As with many of the DCEU movies there’s something of a tone problem. At times Aquaman wants to be a sweeping global drama but would jarringly shift into goofy comedy banter. They’ll be an epic, lava filled stadium where two brothers will battle for the crown…alongside an octopus playing the drums. Most of the visual design is damn imaginative with every undersea kingdom having their own look and technologies reflecting their cultures (including CRAB PEOPLE), but at times it sleeps into straight up goofiness. Like Mera’s jellyfish dress.

At the centre of all this lunacy is Jason Mamoa as Arthur ‘Aquman’ Curry. He may not be the best actor in the world, but he’s a solid leading man. The guy looks like a comic drawing of a superhero physique and he oozes charm. Even when dressed in the classic green and gold Aquaman attire he still looks like a badass. His easy likability helps carry us through the bonkers plot.

Hands down the most fun was the fight sequence in Sicily with Black Manta, a character who unfortunately gets rushed through his set-up just to have him be in the film. This multi-level sequence gives director James Wan the best opportunity to add from of his trademark flair with some very cool transitions to different parts of the battle. Also, weaponised wine is cool.

So yeah, the movie is nuts but it is plenty of fun. It feels like it came from an alternate timeline where the 90s superhero movies never went out of style and instead evolved into this. It’s bright, it’s fun and there’s plenty to love and plenty of ridiculousness.

One thought on “Movie Review: ‘Aquaman’”