Well, that’s the original two seasons done and dusted. Do we have the best behind us or a bright future ahead with the American co-produced Netflix revival? Doesn’t matter, we have a Christmas Special to contend with first…

Premise: Two men, Joe Potter and Matt Trent, have been working together in an isolated, rustic cabin for five years without saying much to each other. One Christmas Matt seeks to initiate a conversation about how they wound up in this place. What follows are three stories about how technology has affected their lives and how everything went wrong for them.

Review: Christmas is a highly emotional time for the most Westerners. Family, friends and loved ones come together to share goodwill and eat too much. Of course Charlie Brooker wants to spread some misery around and show us the slippery slope we are already on as a people.

As with all of Brooker’s best stories this one drops us straight into a strange scenario and makes no effort to help us get acclimatised. Joe (Spall) and Matt (Hamm) say that they’ve been in this cabin for five years and working together but there’s no explanation behind it. There’s a roaring blizzard outside and they talk about having been supplied with the ‘essentials’, leaving the audience to deduce that they’re on some kind of organised isolation. Brooker is a expert at leaving us a smattering of breadcrumbs with which we can piece together a familiar scenario, knowing that we’ll jump to the right conclusions only so he can pull the rug out when we land. And it’s our fault for buying into it.

With a meagre Christmas meal ahead of them Matt insists on trying to get them sharing. To start, Matt tells us about his circle of friends who would over dating advice to each other by watching through ‘Z-Eyes’ technology with the goal of watching each other have sex. We watch Matt coaching Harry (Hardiker) through a Christmas party where he’s got his eye on Jennifer (Tena), an outsider. Unfortunately their blasé attitude towards women comes back to bite them when Jennifer turns out to have some dark secrets.

Having been released at a time when ‘Pick Up Artist’ and ‘Red Pill’ culture was starting to leak from the dingiest corners of the internet into the real world in the form of seminars held by creeps this episode effectively calls out those who participate in this groups. What is initially framed as a comedic scenario in which a dorky looking guy is being coached by a more confident male and a group of observers feels like “boys being boys” and simply helping each other out. When things turn against them it’s a result of their attitude towards women, reducing them down to archetypes and bragging about their ability to manipulate people based on broad assumptions.

The second story, this one involving Matt’s day job, addresses human rights as they exist in a world with artificial intelligence. We are introduced to Greta (Chaplin), a wealthy and particular woman who is having her personality and thought process digitally cloned and turned into an AI construct using herself as a basis. We follow the AI Greta’s journey as she is removed from the Real Greta’s mind and reborn as a formless mind. This is unpleasant and jarring enough, but then we join her in learning that she’s expected to predict the Real Greta’s needs and control her house and appliances for. 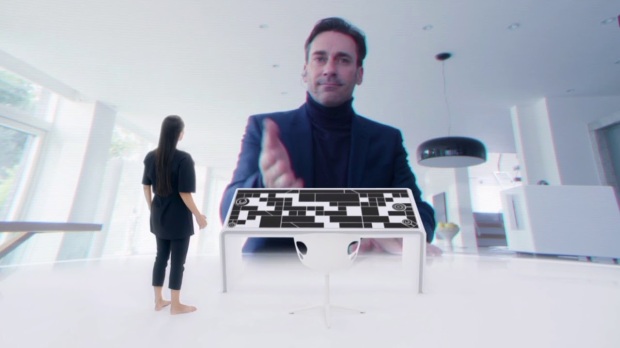 This is all well and good for Greta, who now gets the temperature, lights and toast set to the way she likes it but the AI Greta is less than enthusiastic about her new role. Matt, as the assigned technician, has the job of convincing her otherwise. In order to emphasise her entrapment, Matt demonstrates that they can change the passage of time for the AI so whilst only a few moments pass AI Greta experiences weeks, months and years pass without anything to interact with or even sleep to mark the passage of time. Emotionally and psychologically broken the AI eagerly takes up her new position simply for something to do and Matt leaves with a job well done. Back in the cabin Joe condemns the practise as cruel enslavement while Matt maintains that AI Greta isn’t a real person.

Although short and to the point this story carries a heavy emotional punch. It not only considers what lengths we will go with technology in order to make our lives a bit easier and comfortable, but gives us the perspective of the technology itself. The one aspect of this story that doesn’t ring true for us is the total indifference Real Greta has for the AI. We’ve already seen that people get weirdly attached to their electronics, even more so when there’s some form of instilled personality. There’s a reason people say “thank you” to Siri after getting a response, it’s because people are naturally empathetic. When a new organisation system in your house can actively converse with you and is a complete copy of your mind it’s unlikely that you’re going to treat as little more than a kettle.

Finally we move onto Joe’s story, finally opening up to Matt. Joe was dating Beth (Montgomery) and things looked fine. When Joe discovers a pregnancy test he is overjoyed but Beth confesses that she wasn’t planning on keeping it. As their argument grows heated Beth resorts to ‘Blocking’ Joe, a feature of her optical implant that replaces Joe with a blob of static and prevents him from seeing or communicating with her. As years pass Joe learns that not only has Beth kept the baby but she never removed the block and has no intention to. As Blocks also apply to offspring Joe is unable to see his daughter. As the years pass his desire to connect with his child leads to desperation and the only reprise comes with Beth dies in an accident, lifting the Block. 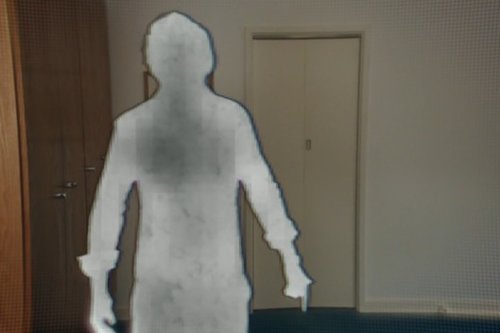 Joe finally gets the chance to see his daughter in the flesh and travels up to Beth’s father’s cabin, a man instrumental in keeping Joe away from them. When Beth’s daughter turns to face Joe it becomes clear that she is not his daughter and Beth had had an affair with their Asian friend Tim. Joe confront’s Beth’s father but things turn violent, resulting in the death of Beth’s father. The real tragedy occurs when Joe confesses to Matt that he fled the scene, leaving Beth’s daughter cowering in fear for two days before venturing into the blizzard along to find help.

And Jesus Christ this is a brutal sequence to watch. Matt coldly pries information from an increasingly broken Joe. Seeing that character spiral and eventually break is bad enough, but it’s Charlie Brooker’s attention to detail that really shreds the heartstrings. After Beth’s daughter emerges from her hiding place she leaves a gift for her grandfather next to his cold body before leaving the house. Matt asking, “how far did she get?” paired with a shot of her fallen body seen through the window is as grim as things get for this series. This is one of the clearest instances of a complete innocent becoming the victim in one of these stories, not a story of a person reaping what they sow. There’s no part of this that isn’t a tragic story.

But there’s more to come. Joe has slowly come to realise that the cabin he shares with Matt is the kitchen which staged his terrible mistake. He begins to ask what their job was and how they got there whilst Matt is celebrating having extracted his confession. This is when all the pieces of the episode fall into place. Matt has entered a simulation housing an AI copy of Joe, the real Joe remaining mute in a cell, and altered time to it felt as though they’d been there for 5 years when in reality it’s been mere minutes. Having obtained Joe’s confession Matt is free to leave prison, but with be blocked from everyone else he meets. We close with both Joe and Matt trapped in an endless, technological based isolation.

Although the three small stories don’t quite get the time and space needed to flesh out the concepts, possibly because they don’t hold up to close consideration, Brooker understands the importance and anchoring your concept in an emotional journey. In that regard this is one of the most effective stories thus far. It took me a month between viewing The Waldo Moment to work up to rewatching this episode (hey, December is a busy month, I prepared in advance). It’s a painful experience.

That Moment When You Feel Your Stomach Drop: When Joe meets his daughter for the first time and his entire world falling apart.

Links to Other Episodes: Got a number here, looks like they were really keen on the idea of a linked universe at this point. First we have Beth performing “Anyone Who Knows What Love Is” as a karaoke number. We have the classic news ticker reference with mentions of characters from ‘The National Anthem’, ‘White Bear’ and ‘The Waldo Moment’. Both ‘The Waldo Moment’ and ‘Fifteen Million Merits’ get referenced in usernames during Matt’s conference call with ‘I_AM_WALDO’ and ‘Pie Ape’. The function and design of implant technologies bear similarities to previous episodes, particularly ‘The Entire History of You’, and it has been speculated that they could be different stages of the same technologies.

Ranking Black Mirror: Being a longer episode featuring three stories makes this a double edged sword. They have more material and the lesser stories are propped up by the stronger ones. It’s hard to pick one previous story that manages to hit as hard though.