I love Black Mirror. Dropping into the show based on a recommendation with zero information was one hell of a trip. The premise behind the first episode was an eye-opener to say the very least, and I didn’t even know it was an anthology. Since then the show has blown up in popularity and been picked up by Netflix. It’s time to revisit the show from the beginning complete with my nerd compulsion to organise everything into lists. After all, there’s only a few weeks before the next season.

Time to tune in. 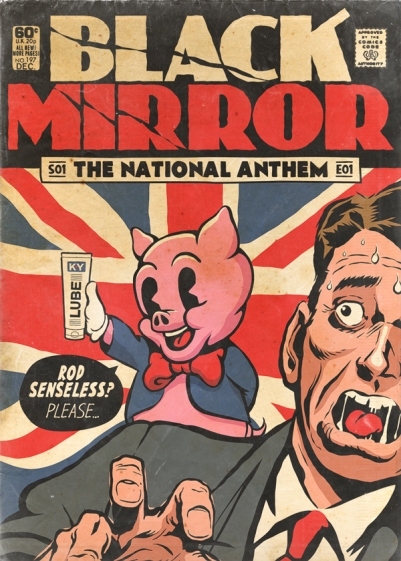 Premise: The British Prime Minister is caught in an impossible situation. An unknown person or group has kidnapped an immensely popular young member of the Royal Family, who they threaten to execute unless the Prime Minister has sex with a pig on live television.

Review: It has to be said, making this episode the pilot is one of the ballsiest moves in the history of television. It’s one of the stories least representative of what Black Mirror would most often depict (it’s not set in the future and and doesn’t feature any fictional technology) and it features a shocking act of bestiality. We can’t imagine how the pitch meeting went. 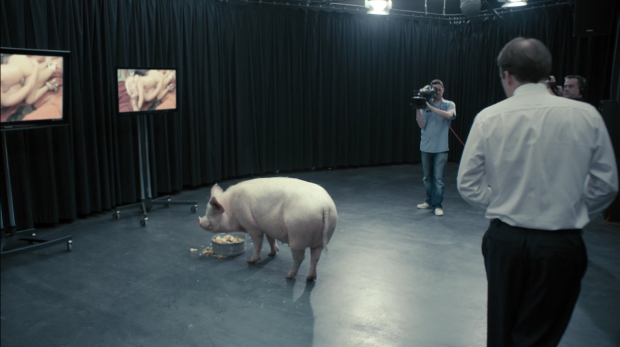 It certainly did its job, people still talk about this pilot episode and use it as a benchmark for the pull-no-punches attitude of the show. Conversely, the infamous pig-fucking premise overshadows the other strengths in the writing and presentation of the show.

The National Anthem is a masterwork in suspense. Once the demands of the kidnapper have been laid out the script systematically works through an destroys any other potential solution to the situation. They try appeals, tracking the kidnapper, faking the ‘encounter’ with the pig…every angle is covered one by one until it dawns on both the Prime Minister and the viewer that there’s only way this nightmare situation can be resolved. It’s impressive how well the episode keeps us engaged, expecting them to save the day at the last moment while seeing Prime Minister Callow (Kinnear) becoming more and more desperate, unhinged and eventually resolved to his fate.

Technology always plays a key role in Black Mirror, and at the centre of this episode is the impact of new media and social networks. Unlike many other episodes this isn’t about where we could be heading as a society but where we have already are. It’s impossible for the the PM’s office to keep the situation under control because the ransom demands are delivered via YouTube, and although it was removed within nine minutes it has been spread globally and become the only conversation people are having. This isn’t a matter for the government to handle, it’s a public forum from the very beginning. The kidnappers take advantage of the way the internet has changed communication by using it to trap the Prime Minister in the arena of public opinion. There are multiple instances of trending hashtags and public polls influences the character’s actions, and it’s through public discussion that the kidnapper learns of the ruse being created using a masked adult performer. It’s the voice of the people who become the ‘national anthem’ of the title.

The news media also feature prominently in a criticism of the cutthroat and urgent nature of the 24 hour news cycle. The journalists of fictional UKN begin by following the D-Notice (an official request for a broadcast black-out for those unfamiliar with British policy), debating the logic of his as the conversation is already public and being had online. There’s a degree of realism added to this made-up network as they namedrop their real-world counterparts often enough. The desire to keep up the competition and not be left in the wings eventually starts their coverage, with one reporter sending sexually explicit texts to a parliamentary insider in exchange for information. This episode does an excellent job of putting media ethics and responsibilities under the microscope, revealing the imperfect nature of the current system but not preaching a solution.

Ultimately the Prime Minister meets the kidnapper’s demand with the twist that the kidnapper is a controversial artist potentially looking to make a statement about media consumption. He has released the Princess, unharmed, and killed himself before the Prime Minister’s broadcast had begun. The message for the audience is to re-examine the way in which media reflects public opinion and the twisted cycle this can become. What it doesn’t do is provide any way out of this system, instead showing it continuing a year later with the public focused on the Princess’s pregnancy, the Prime Minister’s approval being on the rise due to his selfless act (although his marriage has privately crumbled) and the media is still obsessed with the whole affair. What hits home the hardest is the reactions to the spectacle. Most are horrified by what they see but feel compelled to be part of the ‘event’.

Rory Kinnear in particular does an excellent job in this episode, managing the complex emotions of the character in an impossible situation extremely well. When he eventually breaks and attacks one of his staffers we get a very believable sense of what impact this has had on the man. 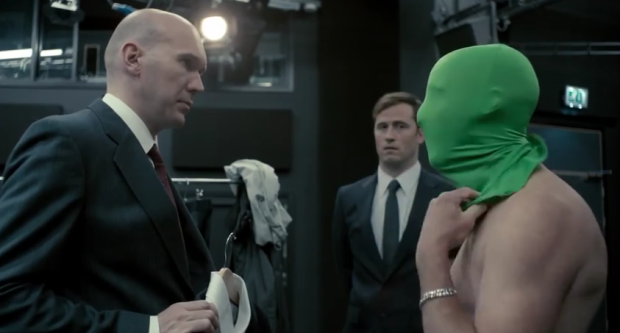 That Moment When You Feel Your Stomach Drop: When we learn that Callow’s actions were all entirely pointless, even if this fact will be forever hidden from him.

Links to Other Episodes: In this episode we get our first look at UKN, the television network that recurs throughout the series. Some of the staff also feature as characters in the episode.

Ranking Black Mirror: Well…it’s the only one of the list…so…