Black Mirrothon Part 4 ‘Be Right Back’

I’ll say one thing about British shows: it’s easy to burn through a season. Just like that we’re into the second season. And it starts with a cracker, the emotionally driven ‘Be Right Back’.

Title: ‘Be Right Back’

Premise: After the death of her boyfriend, Martha struggles to move on with her life. Instead she utilises a service that allows her to communicate with a simulation of her passed loved one.

Review: Once again we have Charlie Brooker at the helm and the associated jump in quality. It’s a restrained script, focused almost entirely on one character and one setting and all the heavy lifting done by one performer. Thank goodness they tapped Hayley Atwell for the part and she is one of the most under-utilised assets in the entertainment industry and perfectly suited to complex leading woman roles.

Martha is dating Ash and whilst they very much care for each other her frustration with his frequent absorption into his social media via his phone. The day after moving into Ash’s family’s house in the country, Ash is killed in an accident. Martha’s grief is compounded by constant reminders of Ash and his life found around the house and the discovery that she is now pregnant. Martha is unable to process her grief and eventually opts to try a new technology based service that builds an AI simulation of a person using their online interactions. 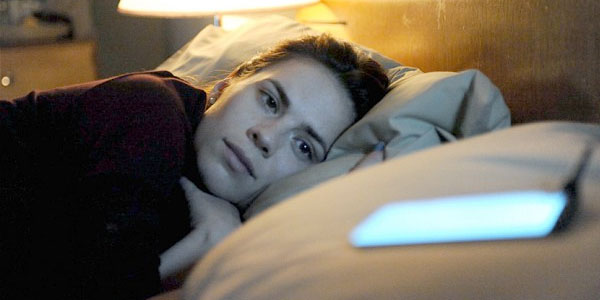 Although initially only using the service to tell Ash that she’s pregnant she finds it hard to stop using it. After a time she upgrades the service to allow voice calls and remains all but attached to her phone to maintain contact. Advances in silicon in medical technology eventually allow Martha to obtain an android replica of Ash. Initially this gives her joy, but the new Ash’s lack of natural humanity begins to upset her and she considers destroying him.

The central theme of the episode is grief, and the process people go through as a result. On the surface the story demonstrates that there is no technological substitute for the process. Every attempt by the service to provide Martha with a method to fill the void in her life slows her ability to process what has happened to her until he provides a complete substitute.

Running a close second to grief in central concepts in ‘Be Right Back’ is the perception of self we create online. The Ash simulation created by the service does not create a perfect replica but uses the information available and what people chose to share online is generally going to be the best side of themselves. When the simulation exists on the screen and as a voice this isn’t a concern for Martha. In fact, she seems more than happy with this perfect, supportive boyfriend. When his silicon replica body arrives the cracks start to show. Even someone half watching the episode will see a noticeable difference in personality. He’s more attentive, thoughtful and curious. Then there’s the inhuman qualities, such as not breathing or closing his eyes when he sleeps.

Martha begins acting out of anger and confusion, unable to fully articulate what is upsetting her or what she wants from the new Ash. Eventually this all comes to a head when she tries ordering Ash to jump off a cliff. Further disturbed by his unnatural compliance she asks him to plead for his life, which he does effectively, further deepening Martha’s confusion.

Unlike the similarly relationship focused ‘The Entire History of You’, the technology does play a central role in driving the story, although it actually reflects the world we currently inhabit. Another impressive aspect of the show is the depiction of future technology. The smart phones with the glass panels on both sides, touch screens in cars and tap gestures were uncommon at the time of this episode but their use have become more wide spread since. The biggest leap of logic is the silicon android, but they cushion the blow by foreshadowing this with a news story early in the episode.

This is a very strong episode, finding a perfect balance between emotional impact and science-fiction concept. The wonderfully natural performances from Hayley Atwell and Domhnall Gleeson tie everything together. ‘Be Right Back’ is a powerfully realistic depiction of the grieving process while contrastingly commenting on the deceptiveness of social media. Even simple touches, like the visual cue of the blue light on the headset when Martha is speaking with Ash, makes this an episode with impressive depth.

That Moment When You Feel Your Stomach Drop: This episode doesn’t deliver a heavy gut punch, but the moment you realise what’s in the crate delivered to the house certainly gives one a cold feeling.

Links to Other Episodes: A minor Easter Egg is the loading screen for the service mirroring the loading screen icon that makes up the show’s title sequence. UKTV makes another appearance during the story about silicon flesh, showing the same headline as in ‘The National Anthem’.

Ranking Black Mirror: This is Black Mirror at its best, it only gets beat by ‘Fifteen Million Merits’ by that episode’s devastating third act.

16 thoughts on “Black Mirrothon Part 4 ‘Be Right Back’”