We are sorry for spamming you with these, but I’m committed to the idea now.

Premise: Two lonely souls are introduced to each through ‘The System’, a dating match algorithm which collects data on people through their relationships which include a pre-assigned length.

Review: After the positive reception to the unexpectedly uplifting ‘San Juniper’ it’s not surprising that Black Mirror has included another episode that gives us an optimistic view of emerging technologies, in this case the impact it will have on finding a life partner. We’ve long past the point where internet dating and ‘hook-up apps’ have shed their stigma and taboo and become a common method of meeting new people, and while ‘Hang the DJ’ initially appears pretty sour on the process the final reveal is a positive one.

When we open on the story of Amy (Campbell) and Frank (Cole) with them meeting for the first time in a restaurant, having been brought together by the AI companion ‘Coach’. Their entire relationship is entire managed by this app, from everything to where they’ll live and how long they’ll be together right down to what they’re going to order to eat on their first date.

Now to straight up spoil the episode – these two folks are artificial intelligent simulations inside a dating app, running the scenario of these two dating a thousand times in order to test their compatibility. Focusing on the microcosm of the characters, with an allusion that they and other unmatched people live in a walled community, helps hide this fact and we get involved in the emotional arc of the characters before we consider how this all fits into the wider world. Watching the episode on a repeat viewing sheds light on these kinds of details but raises more questions. Some of the people they get matched with later down the line seem somewhat cartoonish and we’re not sure if they are simulations of other real people using the app or NPCs filling a role in the process. 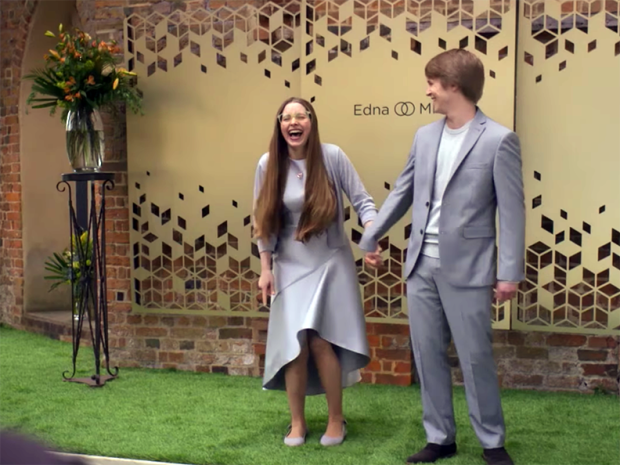 The process is, of course, at the centre of this narrative. When Frank and Amy meet on their first date they learn that they only have 12 hours together and, being new to The System, are nervous about what is expected of them. There’s an obvious connection between them and they share an awkward sense of humour, but I’m glad that they don’t overplay this aspect of the relationship. They have a natural chemistry and it’s handled in a subtle, almost off-hand manner.

Throughout the story there are clues that what we’re looking at is an artificial reality. It’s weirdly noticeable that whenever a stone is skimmed on the pond it always bounces four times. This might slide under viewer’s attention if it wasn’t straight-up mentioned by one character with no follow up. There’s also the confusing and arbitrary way in which the app operates, changing the rules at random times. The device which houses the app for The System is illogical – it’s an awkward looking piece of hardware with a nonsensical interface. It is in defiance of the excellent design work we’d previously seen in the series. There is, of course, another layer to these ‘clues’, however, in that they’re intentionally blatant to serve the purpose of the program. Frank and Amy need to question their reality in order to determine if they will break free and prove that they will fight to be together.

Another noteworthy aspect of the narrative is the sequence showing Amy being paired with a number of new suitors whilst Frank is trapped in a miserable relationship in service of ‘The System’. Amy’s journey is a rare example of a female character being depicted as simply enjoying sex without judgement or repercussions. She ultimately becomes dissatisfied and seeks a relationship with more meaning, but this montage challenges the double standard applied to male and female sexual agency depicted in the media. Perhaps one day this will happen in the media and not stand out as a result, in the meantime it’s good to see it being treated with a degree of normalcy.

It is good that the odd optimistic story is being included in Black Mirror, simply because we see the format being experimented with. Thank god they ended the story with the reveal that the Amy and Frank we followed we one of almost a thousand successes for the couple, leading the real world originals to have an exceptional compatibility rating. After becoming attached to their story it would be disappointing to say the least if they were the outliers and the real Frank and Amy didn’t end up together.

That Moment When You Feel Your Stomach Drop: The happy realisation of what this reality is in aid of during a Tron inspired sequence near the end.

Links to Other Episodes: None that we can see.

Ranking Black Mirror: Gets points for the feel-good story and likeable leads, but feels a bit fluffy compared to other stories in the series.