We have finally made it a full twenty five chapters into our exploration into the unknown. Throughout this saga we have seen; ghosts, monsters, killers, and other bizarre phenomena. But there is no stopping at this point, so submitted for your approval is another edition of Five Creepy Unsolved Mysteries. Once again feel free to explore the archives below. 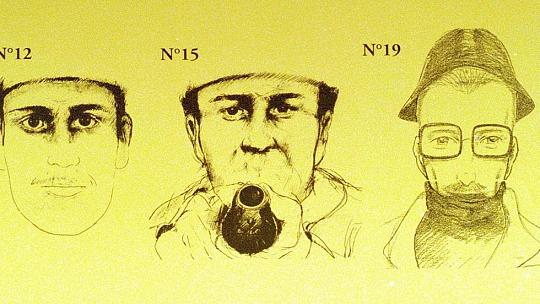 1. Brabant Killers: In the 1980’s the country of Belgium was thrown into chaos and turmoil as the Communist Party sought to gain a foothold in the political arena. But in the province of Brabant, there a much bigger and more threatening problem. In 1982 a group known as the Brabant Killers (or the Nivelles Gang) began a brutal crime spree which remains unsolved. The three known members of this gang, The Giant, the Killer, and the Old Man , along with their rotating gang of henchman would seem more at home in a horror movie or a comic than the streets of Europe. They began by simply stealing weapons, but they quickly upped the ante by brutally torturing and killing those they robbed; suggesting that creating mayhem was the primary objective. The Brabant Killers were certain to leave a body count in all of their robberies it did not matter who it was. In 1985, the gang made their last known robbery of a supermarket. With their faces covered in grease paint, the gang began to execute people in the shop, even going out to the getaway car and returning to wreak more havoc. After a shootout with the police the trio once again escaped justice. This marked the final sighting of the Brabant Killers, but there is evidence to suggest one of them was killed on an old forest pathway near the burned remains of their getaway car. The failure of the police to apprehend these criminals led to widespread changes in Belgian Law Enforcement. This does nothing to alleviate the fact that when all was said and done, 28 people were dead and countless others injured.

2. Paulding Light: When night falls over a certain small town in Michigan, people begin to line up along the streets and stare into the dark woods hoping to catch a glimpse of something unexplained, the Paulding Light. According to legend, a railroad worker in Paulding years ago was killed on the job and now his spirit wanders the earth, his old lantern in hand to continue warding off the darkness. This would be a fun bit of urban folklore were it not for the fact that every night since the 1960’s, a mysterious light has been seen shining through the trees without any explanation. Scientists and paranormal investigators alike have conducted investigations and tests, but no satisfactory answer has been found to explain what the source of the Paulding Light is.

3. Joseph Newton Chandler III: In the summer of 2002, the body of a hermit known as Joseph Newton Chandler III, turned up in Ohio, the victim of a suicide. As the state attempted to find his next of kin, a strange discovery was made; the real Joseph Newton Chandler III had been dead for 57 years. Whoever this man was obtained a copy of Chandler’s birth certificate in the 1970’s and used it to obtain a Social Security card and establish a new identity. In the years that have followed, many sleuths have come up with their own theories surrounding this mysterious man; even pointing out a distinct similar appearance he had to the infamous Zodiac killer. But to this day the man’s true identity is unknown.

4. The Deadly Double Ad: In November of 1941, a mere two weeks before the devastating attack on Pearl Harbor changed the world forever, the New Yorker magazine ran a mysterious advertisement. “Achtung! Warning! Alerte!” the ad proclaimed as it showed two dice, one showing the numbers; 12, 24 as well as two X’s; the other one showing the numbers; 0,5, and 7. On page 86 the ad continued, showing a group in an air raid bunker with the ominous figure of a double headed eagle, which bore an uncanny resemblance to the one Hitler used in much of his symbolism. The bizarre ad was for a game called the Deadly Double, a game which did not actually exist.  Naturally after the bombing of Pearl Harbor this advertisement drew the attention of the FBI who realized that this was possibly code to warn Axis spies within the United States of what was in the works. They theorized that the double X’s on one of the die was probably meant to alert those in the know or it was possible meant to be Roman numerals for 20 which was the latitude of the target. The numbers 5 and 24, were interpreted by many to mean, 5 out of 24 hours the approximate time of the attack. And needless to say the last remaining numbers were 12 and 7 which threw up many red flags.  The FBI paid a visit to the company who bought the space in the magazine, Monarch Trading Company, only to find that the short lived company was probably just a dummy corporation. With this dead end, investigators turned their attention to the mystery man who actually transacted the deal, and paid in cash so as not to be traced. He was discovered to be had died in a mysterious and violent manner weeks prior. To this day nobody knows who placed this ominous ad or what it meant.

5. Gil Perez: In Mexico City in October 1593, a soldier wearing the uniform of the guards at the governor’s mansion in the Philippines turned up out of the blue. His name was Gil Perez and he claimed he had no idea how he arrived in Mexico City, the last thing he remembered was that he was on guard duty in Manilla when the governor was assassinated. Two months passed and a ship from the Philippines arrived in Mexico City, those onboard brought news that the governor had in fact been killed. In addition to this one of the men onboard clearly remembered seeing Perez on duty at the mansion when it happened. Eventually the weary soldier went back to Manilla to continue his life, but his journey to Mexico still remains a mystery.